Alexis Madrigal is Fusion's Editor-in-Chief. He was a senior editor at The Atlantic and a staff writer at Wired. He's the author of Powering the Dream and a visiting scholar at Berkeley.
×

Your email was sent. =]
TWEET SHARE
It’s hot again in California. Down south, the crazy heat is breaking records. Up here in the Bay, it’s just 5 or 10 degrees warmer than normal. Noticeable but not extreme. Across the state, this could just be some warm October weather, which isn’t unheard of.
Or it could be that we’ll realize decades down the line that this is our new climactic baseline: Oakland can regularly expect 80+ degree days in the middle of October, when the light has already begun to yellow and slant. It’s not so easy to talk about the weather anymore.
Scientists say over and over that any individual instance of weather can’t be directly attributed to climate change. And yet, the climate is a whole lot of days of weather. If the climate is changing, so must the weather. 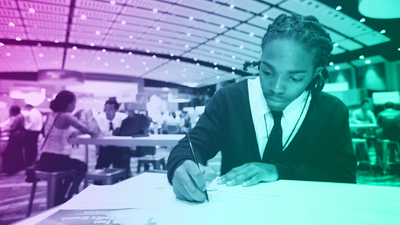 by Fusion Lightworks
Presented by

100,000 Opportunities Initiative
This ambiguity shows up in the science, too. One report from December 2014 said the California drought could probably be chalked up to natural variability. Another in August 2015 said climate change intensified the drought by 15 or 20%, and noted that future droughts are likely to get worse.
It’s not that the climate science isn’t solid. It is. Evidence abounds in fields as different as phenology (the study of when flowers bloom) to phycology (the study of algae). But the precise attribution of some thing happening on an individual day to climate change is not so easy.
So you get this kind of disclaimer in so many stories: “Attributing extreme weather events to climate change is one of the most important aspects of climate change research. It’s also controversial,” writes CNN meteorologist Brandon Miller. “The reason for the latter: It’s difficult to prove a single weather event was ’caused’ by humans burning fossil fuels and warming the planet. After all, extreme weather has occurred all over our planet long before humans started interfering with the climate system. But scientists are clear that some extreme weather events are influenced by global warming.”
The answer to, “Was this climate change?” is roughly “Maybe! But possibly not. OK, probably.” In following energy and the climate for almost a decade, I have read statements like this thousands of times, maybe more.

ADVERTISING
We humans are terrible at statistics. Outside a small set of climate scientists, few people could say with any degree of certainty, how much more likely any kind of weather is now than it would have been 50 or 100 or 200 years ago. But we can compare the freaky weather to our own personal databases of freaky weather experiences and conclude that something may be going on. We can notice the leaves clinging stubbornly to their green or the flowers getting a headstart on spring and feel unnerved by the changes that humans are causing on this earth. Even if we can’t or don’t even know how to prove that this flower bud right here opened because of global warming.
This is a weird feeling! And people are experiencing it across the world. When I spent a few days in Tel Aviv last month, I arrived to a “unprecedented” sandstorm—which no one could remember happening in September—combined with excruciating heat that was 10 degrees above average: the low one night was 80 degrees. In the streets, Israelis apologized to any foreigner in sight: “It’s always hot in early September, but never this hot.”
We don’t give enough credence to the strangeness of living through a baseline change. The experiences that our minds and bodies bound into knowledge stops squaring with the air and sky around us. The most fundamental things in our lives as organisms—the seasons, the temperature, the wind, the rain—suddenly come with question marks attached. To live through climate change is to question whether a warm day or a flower blooming is a nice thing or an omen.
No one really knows how to talk about these things, either. People joke on a hot day, “Must be climate change!” Or on a cold day they mutter, “We could use some global warming.” But that’s closer to astrology than climatology.

We need a way to describe the lack of clarity. We need a word that reflects the basic anxiety of not knowing what the weather means anymore. And so let me suggest a way to describe both the mental state and the weather that causes it: climate changey.
I know this word doesn’t sound technical or impressive. It’s a low-road word, a compound modifier formed by adding the childish -y onto the end of this global phenomenon. But it’s useful for our current state of necessary equivocation.
Climate changey could describe the storm which delivered 20 inches of rain to South Carolina, leaving the governor agog—”This flood disaster has been like nothing South Carolina has ever seen”—and even the weather forecasters awed: “A very unusual combination of weather factors came together in just the right way to produce rainfall rates rarely experienced and total rainfall never precisely recorded before in part of the southern United States.” Was it climate change? At the very least it’s climate changey.
Climate changey lets you describe the way snowstorms keep hitting cities and overwhelming their infrastructure, leaving the city government helpless and embarrassed. I wrote a little essay about this in 2010, and every year, it happens in a new place with a new befuddled mayor.
Climate changey says we don’t know precisely what’s gonna happen to our world because of all the carbon emissions we’ve sent into the atmosphere, but something’s gonna change. And our bodies will experience that transformation as the air on a fine October day or the leaves out of sync with the light we remember.
Posted by DANIELBLOOM at 10:36 PM