This is a blog post by a college student at Vanderbilt University in Nashville.


Last month, I attended a group dinner event with cli-fi author Nat Rich to discuss his novel Odds Against Tomorrow, which has been hailed as the pioneering work of a new genre of literary fiction known as cli-fi. 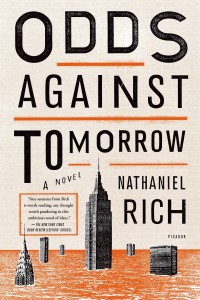 In writing Odds Against Tomorrow, Rich wanted to address the anxiety of the modern age in all of its forms. “Natural disasters, epidemics, terrorism, nuclear war, financial collapse — it’s all in there,” he says. It is the man-against-nature story of what happens to disaster-obsessed mathematician Mitchell Zukor when a Category-3 storm hits Manhattan.

We talked about the process of writing such a cli-fi: “Research is how writers procrastinate,” joked Rich.

In researching his novel, he read books about probability math and descriptions of natural disasters such as the Dust Bowl in the 1930s. He read biographies of famous scientists and mathematicians to get inside their heads, and he studied flood scenarios of New York City.

During the group dinner, we also discussed the role of cli-fi in the discourse on environmental change.

“Ethical journalism is not allowed to be sensational, and yet many facts about the future are scary. People have this hunger to engage with their fears, and fiction is an outlet for that,” says Rich. During the Cold War, he says, people could read spy stories and other thrillers like 1984 by George Orwell, but in today’s world, people just go on the Internet and obsess over the seismic activity of the Yellowstone caldera.

It was an engaging discussion, [but is it reality?]

Reality is that in October 2012, “superstorm” Sandy ravaged the Eastern Seaboard from Florida to Maine, flooding New York City with a 13-foot storm surge and costing the United States $71.4 billion in damages. Reality is that this won’t be the last time a storm takes Sandy’s unusual path — the “left hook” directly into New Jersey — will be more common as mid-Atlantic ocean waters warm, according to some geoscientists.

In attendance at the dinner was Prof. Teresa Goddu of the English department, who was responsible for inviting Rich to our campus is the person who set the whole thing up. Professor Goddu commented that in the novel, the storm incapacitates Wall Street, the symbol of our country’s economic strength. Yet as soon as the waters recede, the machine starts again, and the underlying issues are never resolved.

There’s the sense that there will be another disaster, that this will happen again, she said.

“How can we make peace with the uncertainty of the future?” asked Professor Goddu. “To what extent do we freak out, and to what extent do we proceed with our lives?
”
Personally, [as a Millennial who will graduate from Vanderbilt in the future,] I believe neither route is the answer; it doesn’t help anyone to stay up nights fretting about the impacts of climate change, but on the other hand, we cannot proceed with business as usual.

The problem of global climate change demands that we change our lifestyles and our national and international policies. Susceptible as they are to storm surges, the Manhattanites are on the right track: living smaller, living closer, and driving less, as part of overall increases in urban density, are key in reducing carbon emissions.

Globally, we must take political action that looks out for the interests of vulnerable developing countries, especially those with large agricultural sectors. The future is highly uncertain, but like the protagonist in Rich’s acclaimed ''cli-fi'' novel, we can take action.

This post is a contribution is a post by a college student at Vanderbilt  and it does not necessarily represent the opinions of Vanderbilt University.

Posted by DANIELBLOOM at 7:50 PM