From the pen of Cli-Fi expert Dr. Svoboda at GWU

In the months since that 2014 series of essays was posted, several new films have dealt with climate change in one way or another, most now or soon available on DVD, blu-ray, or online.

This update in the summer of 2015 reviews 6 of these films. Two – Mad Max: Fury Road and The Last Survivors – are engaging re-interpretations of the desert dystopia genre pioneered in the original Mad Max movie. A third, Sharknado 3, is a disappointing addition to the campy cli-fi disaster movie franchise. The fourth, Tomorrowland, a cli-fi starring George Clooney, simply fails to hold together. But the fifth – Kingsman: The Secret Service – a true cli-fi, according to Peter Sinclair, that breaks new ground by incorporating an arch-villain in a CF film that addresses climate change.

NOTE: Most interesting of all, however, is a made-for-TV movie that first aired on CBS in the spring of 1993 but which was only released on DVD last July. Over its 3 hours in 2 parts, The Fire Next Time realistically addresses several possible impacts of climate change while depicting, at least in outline, alternative low-carbon lifestyles. This in 1993, on one of the three major tv networks!

Mad Max: Fury Road has been  released on blu-ray. Those eager to see a dystopic desert drama that vaguely alludes to climate change before then can look at The Last Survivors, available now on blu-ray.

Set in Oregon “a few years from now – and years since the last rain,” The Last Survivors follows a female protagonist as she seeks a way out of her dangerous, desiccated world. While it does not include the genetic inversions of Mad Max: Fury Road, it does have a ruthless overlord who recognizes that whoever controls the water also controls the land and the people who live on it.

Among the cli-fi firsts racked up by The Last Survivors, in addition to its Oregonian setting, is the use of a samurai sword. That’s no match for the Cirque-du-Soleil leaning-pole attacks, from moving vehicles, during the climactic chase scene in Mad Max: Fury Road, but it adds drama to the protagonist’s final battle with the water miser.

Neither film suggests a practical response to climate change, but both make it seem quite nasty.

It may seem silly to suggest that a movie franchise predicated on shark-filled tornados has lost its bearings, but in upping the ante, as sequels typically do, Sharknado 3 increased only the number of sharks; the number of truly funny scenes and lines decreased. And gone are the amusing references to global warming (Sharknado), the urban heat island effect, and the shark-front on the TV weather forecaster’s map (Sharknado 2). The nation’s capital, destroyed and forgotten before the opening credits ran, gets much less screen time than Orlando. This movie is cli-fi comique! Silly. 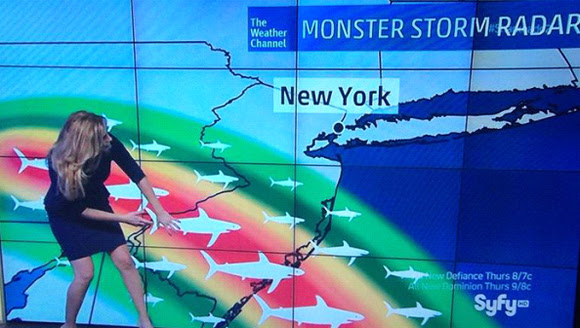 Tomorrowland suffers from the opposite problem: it never finds its bearings. Many will finish the film, which still has no date for its blu-ray release, confused about what they have just seen. Nevertheless, the cli-fi film that did engage many viewers, offers adults an edifying sense of how children might be affected by the steady stream of doomsaying. The future for young babyboomers was decidedly different from what’s now being offered to schoolchildren, and that’s a point Tomorrowland makes quite well.

In print, climate alarmism met climate denialism fairly early on. In his 2004 cli-fi novel, State of Fear, Michael Crichton, now deceased, presented climate change as a hoax propagated by conspiring and self-serving environmentalists. That sort of counterpunch was not delivered on screen until Kingsman: The Secret Service hit theaters in 2015 where Peter Sinclair lauded it as a top cli-fi contender for the annual Cli Fi Movie Awards.

In this British spy-fi cli-fi  movie, a smart working class tough is recruited for an elite unit of special agents, the Kingsmen. Meanwhile, a wealthy venture capitalist prepares to cull the world’s human population to save the planet from pollution, despoliation – and climate change. Kingsman does not deny these environmental problems, but it does mock public concern for them. (One of the Kingsmens’ trainers describes a scientist who had been the object of a failed rescue mission as “some climate change doomsayer.”) Instead it challenges elitism and class snobbery – while admiring the finer things money and education can procure.

In this context, the cull, which would be carried out by ordinary citizens mindlessly killing each other in response to a rage-inducing wireless signal, raises some flags. The signal is to be delivered via a free phone and internet service offered by the black, lisping, hip-hop accoutered villain played by Samuel Jackson. In this plot turn, some reviewers saw allusions to the “Obama phone” video that went viral, on conservative websites, during the 2012 USA presidential election.

So many culture-war flags are raised in this movie, in fact, that a reviewer at the website for the Glen Beck Program was prompted to ask, “Could this be the most conservative film of the decade?”

There are lessons to be learned by watching Kingsman: The Secret Service, out now on blu-ray: Climate-change communicators may be dealing with its political fallout for years.

Posted by DANIELBLOOM at 5:30 PM