LISTEN TO THE NPR SEGMENT BELOW scroll downnnnnnnnn... to hear it!

THIS BLOGGER SAYS: Climate George is wrong and NPR fell for it. I lived in Juneau for 12 years, right next to Mendenhall Glacier, a mile away by car, and visited the glacier center three or four times a week, just sit and stare at the amazing glacier mouth. And I walked along Hidden Falls Trail for 12 years. I saw the glacier retreating year by year, 1979 to 1991. I worked as a newspaper reporter in Juneau, ran a little weekly newspaper, whose office was just 2 miles from the glacier. GEORGE is wrong. In fact, most of us ARE hardwired to accept and deal with climate change. I leared to come to terms with the reality of AGW by living in Alaska for twelve years and by reading newspaper accounts of scientists dealing with AGW and reading about the IPCC reports and that is how I woke up. I, like millions of others, AM HARDWIRED to deal with and accept and fight against climate change. While George's book title is a PR dream, in fact, he is wrong and he needs to revise his book for 2016. NPR did a nice report but they did not do a BALANCED report, showing that other observers say that in fact are hardwired to accept climate change. Great little segment, but it was wrong headed. I lived in Juneau. John Neary is correct. That million year old glacier, or 10,000 years old?, that Mendenhall visitor venter helpde to wake me up and led me later on to coin and create and do PR for cli-fi genre and bceome a climate activist. WE ARE HARDWIRED To accept AGW. George, repent! Explain yourself better next time!


THIS BLOGGER SAYS:  George ''climategeorge'' Marshall  is wrong, in fact, we DO accept AGW now, we ARE hardwired to accept climate change IF we have that kind of wiring and millions of us do , and we learned about AGW from reading science papers and charts and photos and movies and.... George goes on and on about promoting his book and lecturing as a guru speaker around the world on the issue to make his living but in fact he is WRONG. many minds are wired that way but NOT all, and now many people accept climaet change.countless others. what woke me up? and i guess you too. mounds and mounds of newspaper articles about science facts and chart about global warming we read in 2006 to 2012 or so, and my mind woke up very easily. I came to coin cli fi fromr reading Guardian news stories about IPCC reports. so george is just a phd academic full of PHDness to promote his career and make money from speaking fees. in the NYT times room for debate forum that i arranged with editors there, he was one of six experts invited and rather than say CLI Fi is a good positive way to wake people up,  he said in the NYC that "cli fi will NOT wake people up"..... HOW WRONG HE WAS in 2o12 and still wrong today yet he is the go to guy for NPR? George has low EQ, he is all high IQ and eloquent speaker and a very smart guy in Wales UK and i like him, but he is WRONG. we *are* hardwired to become empaths for future, IF we are so hardwired by our dna and personal EQ and you and I and countless others are. But George makes his living by being guru for his thesis which is in fact wrong. Millions of us woke up to AGW because of the facts and figures and movies and photos we saw. put two and two together to get FOUr. George has no artistic sensibility at all. I told him that, politely, because basically i like him. we often corresponded before ...now he has not answered my emails in three years ever since the NYT debate. he is wrong. but the cool sounding TITLE of his book is good and in some cases yes, some people are hardwired to care more about this generation than 20 generations in the future, true. but I and YOU are proof that we can go beyond our hardwiring to become AGW activists and issue shouts from the rooftop via novels and movies and climate activism . GEORGE is wrong. i told him so. he shut me off. see?
***"Curious, empathetic, compassionate: What we should be as human beings."***

Why Our Brains Weren't Made To Deal With Climate Change 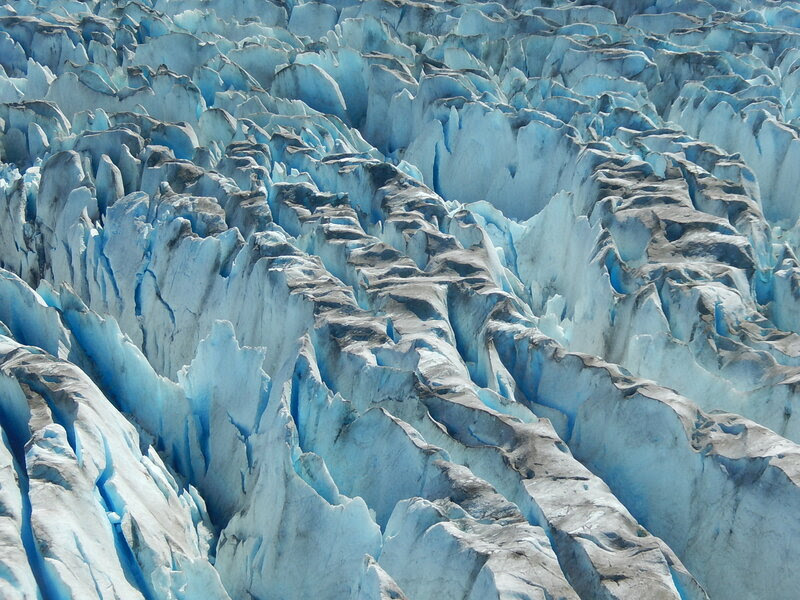 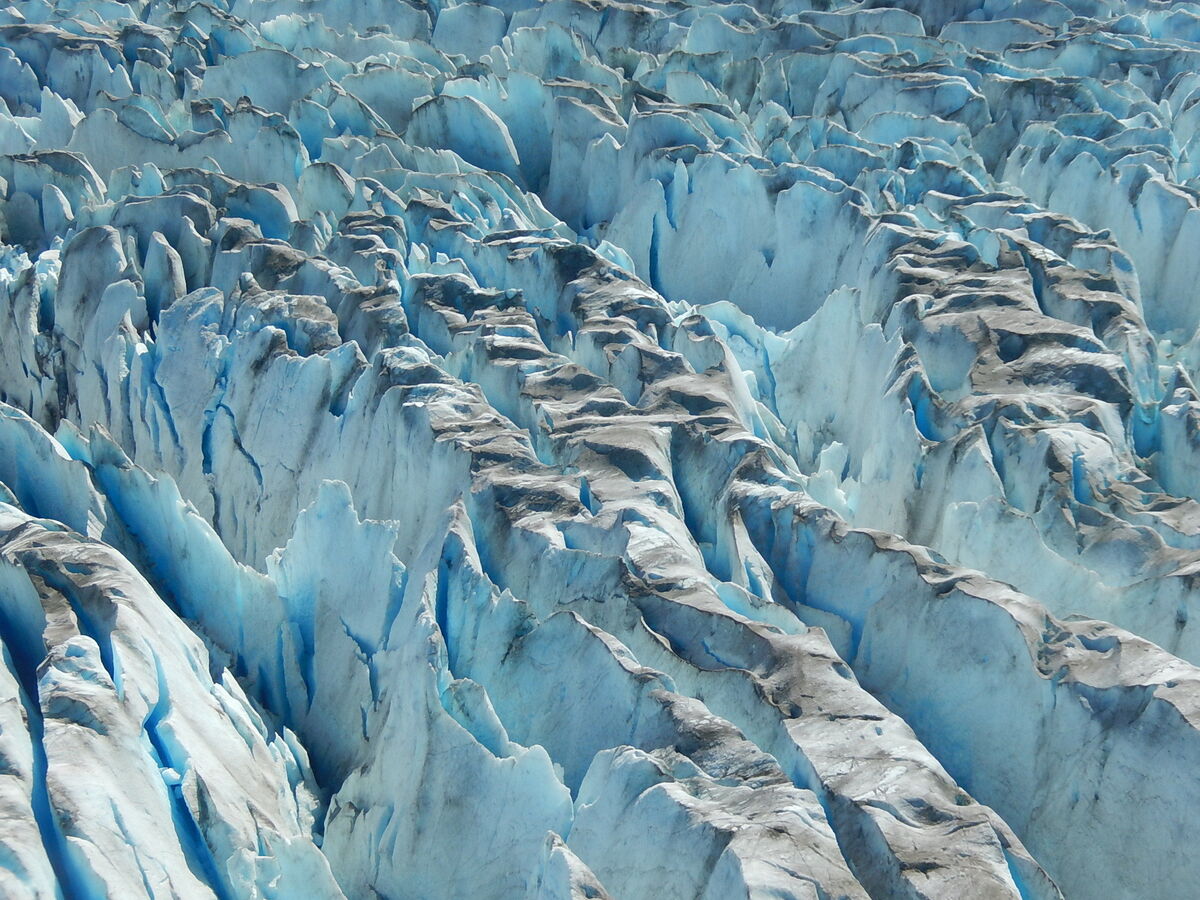 Many glaciers are melting in Alaska. Scientists believe climate change is at work.
Shankar Vedantam/NPR
Hidden Brain host Shankar Vedantam takes you on vacation with him to Alaska. You'll hike on top of a glacier, drink from a cool stream, and talk with fellow tourists from around the world. But the trip comes with an upsetting observation: Glaciers in Alaska are retreating. The Mendenhall glacier, visited by tens of thousands of tourists each year, has receded more than a mile and a half in the last half century.

"It's sort of just collapsed in on itself," says John Neary, director of the Mendenhall Glacier Visitor Center.
Many see the glacier's retreat as an ominous symbol of climate change. But not all. Shankar talks with tourists who are skeptical that climate change is even occurring. And so the question: Is there something about the human brain that makes it hard for us to grapple with climate change?
After returning from vacation, Shankar calls George Marshall, Director of Projects at Climate Outreach and author of Don't Even Think About It: Why Our Brains Are Wired to Ignore Climate Change, about the behavioral challenges and solutions to addressing climate change.
The Hidden Brain Podcast is hosted by Shankar Vedantam and produced by Kara McGuirk-Alison, Maggie Penman and Max Nesterak. To subscribe to our newsletter, click here. You can also follow us on Twitter @hiddenbrain, @karamcguirk, @maggiepenman and @maxnesterak, and listen for Hidden Brain stories every week on your local public radio station.

Glacier tourists to get a dose of climate education in Alaska

What a melting glacier can teach Alaskan cruise ship passengers.


Two big things have happened since John Neary arrived in Alaska's rainy capital city 33 years ago: Juneau's most famous attraction, the Mendenhall Glacier, has receded by more than a mile; and the number of visitors to the glacier has nearly tripled, to 450,000 a year. “On Monday afternoons, the busses are lined up 30 deep,” Neary says. “The place is not suited to the volume of traffic it's receiving.”
The surge can largely be explained by an increase in Alaskan tourism over the last few decades. But visitors have more than doubled in the past 16 years alone, and at least part of that can be attributed to “last chance tourism,” or the flow of people rushing to see at-risk places before they're destroyed by climate change. An online list of the top nine destinations to explore “before climate change takes them away” includes the flooding city of Venice, the acidifying corals of the Great Barrier Reef, and the receding glaciers of Alaska.
Yet while Alaskan cruise lines are reaping the benefits, the economic boon of last-chance tourism is, of course, fleeting. A few hundred miles away on the Kenai Peninsula, Portage Glacier has seen its visitor numbers drop dramatically, in part because the once-famed tongue of ice has retreated completely out of sight. Neary, who took over the direction of the Forest Service's Mendenhall Glacier Visitor Center 18 months ago, says that's not an immediate concern at Mendenhall, but before long, there won't be any more translucent blue ice floating in Mendenhall Lake.
“When I first came here, the glacier was visible from the west lake shore line,” he says. “Now you can't even see the face.”

WHAT? Cli fi will REINFORCE EXISTING VIEWS? HOW COULD HE BE SO BLIND TO THE POWER OF LITERATURE?

George Marshall is the founder of the Climate Outreach Information Network and author of the forthcoming "Don't Even Think About It: Why Our Brains Are Wired to Ignore Climate Change."
July 29, 2014

Climate change is an exceptionally ambiguous threat. There is no external enemy with an intention to cause harm. The personal impacts of ever more bizarre weather are still intermittent and open to biased interpretation. And when scientists speak with professional caution about uncertainties and effects far off in the future, we distance ourselves further from an issue that — let’s face it — we were already all too willing to ignore.
Stories are vitally important for us to make sense of climate change. The rational side of our brain can readily accept that this is a problem. But it needs the alchemy of stories to turn that cold data into the emotional gold it needs to mobilize.

The unconvinced will see these stories about global warming as proof that the issue is fiction, exaggerated for dramatic effect.

The problem is that stories are also the means by which people define their personal identities. This means that every story about climate change presupposes social values that might lead some people to reject the information it contains. The dominance of the liberal environmental viewpoint on stories of climate change -- the polar bears, consumer guilt and calls for greater government controls -- is a major reason why it has become so toxic to conservatives.
I predict that “cli-fi” will reinforce existing views rather than shift them. The unconvinced will see these stories as proof that this issue is a fiction, exaggerated for dramatic effect. The already convinced will be engaged, but overblown apocalyptic story lines may distance them from the issue of climate change or even objectify the problem. BULLSHIT!


There is too much silence on the topic and cli-fi is a welcome addition that could help people talk about climate change more, but to build conviction this genre would need to contain stories about a successful struggle to defend shared values with a resolution in a world that is stable, secure and, in some ways, better. I am not sure that many writers will get excited about writing that!
Posted by DANIELBLOOM at 7:29 PM