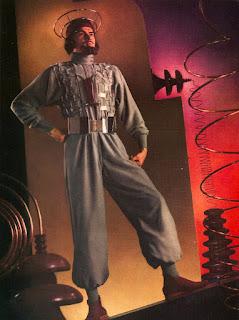 NOTES FROM A CONVENTION:

During presentations, speakers often preface digressions with phases like “This next bit would be a cool idea for any science fiction writers in the audience to play with …” Every physicist, engineer, and enthusiast I spoke to said their career had been, and still is, inspired by books, TV shows, movies, comics about space travel.

The physicist Les Johnson, who MC’d the talks, is deputy director of NASA’s Advanced Concepts Office, principal investigator of a solar-sailed probe set to explore an asteroid in 2018, and, yes, a sci-fi writer.

He told me science fiction is part escapism, part aspiration, and part inspiration, bringing broader acceptance to the dream of exploring the stars. Preach.

(I should add that not everybody agrees with this notion of science fiction as an aspirational genre. My editor sees science fiction as primarily a fantastical lens for writers to comment on contemporary society. I posed this alternative hypothesis to science fiction author Jack McDevitt, who counterposited that my editor must have been an English major.)

The worldship rings could replicate any Earthly climate by adjusting heat and precipitation.


The climate subgroup of worldshippers is huddled over a single laptop, working on the rain problem.

A French-Canadian engineer named Michel Lamontagne tells me planet Earth has the best plumbing system in the universe. Solar energy heats moisture, moisture rises, cools, condenses, falls, wash, rinse, repeat. Figuring out the thermodynamics of cloud formation is a pain in the ass, but way more reliable in the long run. No pipes to clog, filters to foul, screws to strip, vents to dent, valves to rust. Maintenance is not just a hassle; any mission-critical system with an abundance of moving parts is bound to fail—critically—at some stage of a multigenerational interstellar mission. Plus, rain helps keep the dust down.

Worldship passengers: cockroaches, dogs, Maine coon cats, rats, crickets, and tarantulas. But nothing from Australia. Everything there wants to kill you.

How much energy does moist ground need for evaporation to occur? On Earth, insolation is about 1200 watts per square meter, Lamontagne says.

Posted by DANIELBLOOM at 7:36 PM

You may be qualified for a new government solar energy program.
Find out if you're eligble now!