Copyright © 2015 by Kim Stanley Robinson. Text below excerpted via Del Rey, a division of Random House LLC. All rights reserved.

Kim Stanley Robinson’s Science in the Capital trilogy is revered as a classic of environmentalist science fiction, years ahead of its time.
Now it’s being re-released as a single volume, called Green Earth. He explains how, and why, he cut three books down into one.
[****** NOTE: Rebecca Evans, writing for the Los Angeles Rewview of Books in April 2016, called the omnibus a powerful example of cli-fi subgenre writing and explains why here:]
http://northwardho.blogspot.tw/2016/04/rebecca-evans-newly-minted-phd-literary.html
TEXT
Peter Matthiessen, who died in 2014, was a great writer. His nonfiction is superb, and his novels are even better: At Play In the Fields of the Lord is an epic thing, and Far Tortuga is brilliant and moving, one of my favorite novels. You read those books, you’ve lived more lives.
His third great novel has an unusual publishing history. It first appeared as a trilogy, in volumes called Killing Mister Watson, Lost Man’s River, and Bone By Bone. Then about ten years later it reappeared in a single volume, considerably compressed by Matthiessen, titled Shadow Country.
When I picked up that book in a bookstore and read Matthiessen’s foreword explaining what he had done, I immediately said to myself, “I want to do that with my [''cli-fi'' subgenre] climate trilogy.”

This reaction surprised me. I had not been aware that I harbored any longing to revise those books. When I finish a novel I generally move on without a lot of looking back. On completion I feel a glow, as when finishing any job, but it’s also a little sad, because the characters stop talking to me. It’s like being Calvin and watching Hobbes turn back into a stuffed doll. Could be tragic, but in my case there is a solution, which is simply to start another novel. That’s what I do, and on it goes.
http://www.amazon.com/Green-Earth-Ki...

$15
From amazon
30 purchased by readers Gawker Media may get a commission
Buy now
But in the case of my climate trilogy, which was published between 2004 and 2007 under the titles Forty Signs of Rain, Fifty Degrees Below, and Sixty Days and Counting, it appeared that I still had the urge to tinker. After some reflection it began to make sense. Almost fifteen years have passed since I started that project, and in that time our culture’s awareness of climate change has grown by magnitudes, the issue becoming one of the great problems of the age. In this changed context, I had the feeling that quite a few of my trilogy’s pages now spent time telling readers things they already knew. Some of that could surely be cut, leaving the rest of the story easier to see.
Also, my original idea had been to write a realist novel as if it were science fiction. This approach struck me as funny, and also appropriate, because these days we live in a big science fiction novel we are all writing together. If you want to write a novel about our world now, you’d better write science fiction, or you will be doing some kind of inadvertent nostalgia piece; you will lack depth, miss the point, and remain confused. 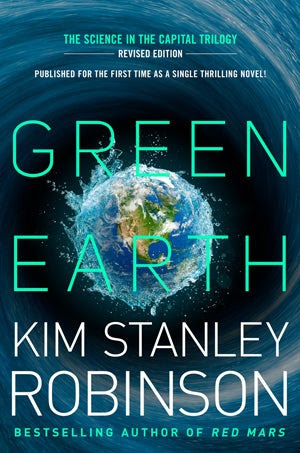 So I felt then and still feel that my plan was a good one; but there was a problem in it that I didn’t fully gauge while I was writing. Science fiction famously builds its fictional worlds by slipping in lots of details that help the reader to see things that don’t yet exist, like bubble cities under the ice of Europa. Just as famously, novels set in the present don’t have to do this. If I mention the National Mall in Washington D.C., you can conjure it up from your past exposure to it. I don’t have to describe the shallowness of the reflecting pools or the height of the Washington Monument, or identify the quarries where that monument’s stone came from. But the truth is I like those kinds of details, and describing Washington D.C. as if it were orbiting Aldebaran was part of my fun. So I did it, but afterward it seemed possible that occasionally I might have gone too far. Every novel is like a ship and has its own Plimsoll line, and if you load it past that line, a storm can sink it. Readers may be inclined to abandon ship, or refuse to get on in the first place.
So with those considerations in mind, I went through my text and cut various extraneous details, along with any excess verbiage I could find (and I could). Inspired by Matthiessen, who compared his middle volume to a dachshund’s belly, and shortened his original 1,500 pages to 900, I compressed about 1,100 pages to about 800. Nothing important was lost in this squishing, and the new version has a better flow, as far as I can tell. Also, crucially, it now fits into one volume, and is thereby better revealed for what it was all along, which is a single novel.
Advertisement

If anyone wants the longer version of this story, it will always exist in the original three books. That trilogy was sometimes called The Capital Code, but more often Science In the Capital, the title I preferred. Those titles can continue to designate the original trilogy. This shorter version is called Green Earth, I’m happy to say. It’s a chapter title in my Blue Mars, and I always wanted to put it on a book, as it’s a very nice description of what we can achieve in the coming centuries, if we succeed in building a sustainable civilization. We haven’t done that yet, but now’s the time to start. This novel is one version of what that start might look like.
Copyright © 2015 by Kim Stanley Robinson. Excerpted by permission of Del Rey, a division of Random House LLC. All rights reserved. No part of this excerpt may be reproduced or reprinted without permission in writing from the publisher.