Grappling with climate change in U.S. cities: a pre-apocalyptic comic book, Warning from my Future Self

Jean Tepperman and Alfred Twu's pre-apocalyptic comic book, Warning from my Future Self, casts ten year old Gabe Sanchez of East Oakland in a dream-visit to the future. From fifty years forward, Gabe and his grandfather look back on the life Gabe has yet to live. Gabe's dream is a wake-up call to a future whose outlines are clearly discernible here in 2016's real world, and it points readers at questions that matter most: What is to be done about the rough ride humans are in for, in light of climate change-induced threats exacerbated by brutal gulfs in wealth and power between communities and nations? Should we focus on mitigating the damaging effects of human activity on our common biosphere? Or should we prepare to deal with damage and change we can no longer avert? 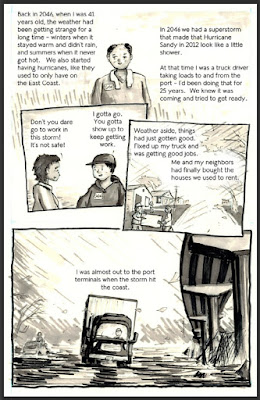 We're all (too?) familiar with dystopian stories set in a near or distant future, in which our planet has weathered one catastrophe or several, and society has devolved to some form of survivalist, tribal, or feudal savagery. Stories like these can be compelling for a number of reasons. For some, they comfort by comparison: our lives aren't so bad as those in the novel, movie, or TV show. For others they may serve as a cathartic release, dampening fears by rendering them as imaginary, letting us duck real-world responsibility for genuinely terrifying circumstances.

Dystopian stories can also evoke a future we find so unwelcome that, confronted with that future's possibility, we're motivated to engage in the work of making sure something different happens. Perhaps that's the ideal case.

Tepperman and Twu aim even higher.

Warning from my Future Self, published late last month, depicts a crisis set in 2046 that's hard to feel good about: "a superstorm that made that Hurricane Sandy in 2012 look like a little shower." The superstorm wreaks its damage thirty years from the present time, and twenty years before Gabe's dream-future. It disrupts transportation and commerce for years. By 2046, California's farmers have already been plowed under by drought, heat-accelerated disease, and weather patterns that interfered with crop lifecycles. Banks were implicated in foreseeing the vulnerability of economically disadvantaged communities situated in coastal flatlands, withdrawing investment in favor of shoring up gated communities on higher, safer, whiter ground. Pollution has been exacerbated by hot weather, so more kids have had a harder time breathing. Every year there was less to buy in Bay Area markets.

None of these scenarios are hard to imagine thirty years out. All of them are extrapolations from what we're experiencing in the U.S. today, from drought wrecking forests to rising seas overcoming coastal communities to superstorms to corrupt politics that sacrifice vulnerable communities -- and it's far worse in the Global South, from India to Syria to South Africa. "Even in your day pollution was worse here than in other neighborhoods," Gabe at 60 tells his 10-year-old self. "Back then half the kids around here had asthma. Now they mostly all do."

Yet in Gabe Sanchez's future, preparation has equipped communities with resilience to face the crises. By the time he visits his future, the Sanchez family has torn down their house, downsizing into a garage in order to farm more of the parcel of East Oakland they bought at a discount from retreating banks. Gabe uses his mechanical know-how to repair cars when his job as a trucker goes kaput, then when cars begin to disappear he becomes an all-purpose fix-it guy. Local barter replaces a national economy. Life is harder than it used to be, but Gabe-of-the-future is better-equipped to roll with the punches because his grandma taught him to garden when he was young and he picked up mechanical skills, while his future wife studied nursing and can offer care and comfort that a decaying world needs.

Then there's the kicker:

Gabe-at-10 will return from his dreamed future to 2016, equipped with a vivid understanding of how hard life will get if people in the here-and-now don't compel government to put a brake on reckless fossil fuel consumption and quickly ramp up transition to clean energy. And a bracingly clear view of how much harder it will be for himself and his family if people don't "organize our community so we can take care of ourselves."

Warning from my Future Self is a call to action: mitigate what we still can; prepare for what's inevitable. That's what makes it a pre-apocalyptic comic book.

In a Huffington Post piece of last October, Pre-Apocalyptic Fiction: Staving Off Catastrophe, I characterized this underreported genre as:


...stories that aren't so speculative as their darker, world-gone-kaput cousins. Pre-apocalyptic stories take place in the world that exists, not a world that might come to pass. We recognize the world of these stories as our own. Apocalypse -- an existential threat to all humankind, or to all life on Earth -- is not a foregone conclusion, though threat looms large. In a narrator's or protagonist's view, the end might be nigh.

Most importantly, the pre-apocalyptic category is a form of moral fiction. The heroes in these tales are women and men who are doing what they can to turn the apocalyptic tide.

Warning from my Future Self presents a history that might come to pass, but does so in the service of painting our world-on-a-cusp in an honest but hopeful light. The resilience it describes is the best we can credibly aim for, and the story focuses its readers on the work we have before us to make that best-possible outcome real.

Check it out at the Sunflower Alliance, where where Warning from my Future Self (PDF) has been made available under a Creative Commons CC-BY-NC 4.0 license. Printed copies are expected to be available this Spring: write to oaklandfutureself@gmail.com for information.
Posted by DANIELBLOOM at 6:12 PM

I'd hang out with Chinese friends, but with a mix of Cantonese, Mandarin, Taiwanese, and English speakers, when we were together, we'd all talk in English.

There is a chance you're eligible for a new government sponsored solar rebate program.
Find out if you qualify now!