“Punting the prairie dog into the library was a mistake.”

Not exactly “Call me Ishmael,” but enough of a first sentence to intrigue this Kansas librarian. I had heard good things about the new book by up-and-coming author Claire Vaye Watkins and was eager to read it.

Watkins was born in Death Valley and raised in the Nevada desert. Her previous book, “Battleborn,” is a prize-winning collection of powerful short stories that echo that inborn interstate tension, tales struggling between boom and bust, hope and despair, action and ennui.

The atmosphere throughout much of “Battleborn” is like that in the classic old Western, “The Good, the Bad, and the Ugly,” life (and death) moving slowly through sweat and shimmering white light. The feeling continues in Watkins’ new book, “Gold Fame Citrus.” Like Paolo Bacigalupi’s “Water Knife,” which I reviewed a few months ago, it’s a “cli-fi” (climate fiction) novel that takes place fairly soon in the increasingly dry American southwest.

Unlike “The Water Knife,” though, the story is not so cutting-edge.

The title should have warned me. First, the commas seem to have blown away in the Santa Ana winds. Call me persnickety, but these things matter.

Second, it gets the chronology of the California mirage (as one character calls it) inside-out.

These minor quibbles lead to others. In the first pages, right after the prairie dog gets punted, Watkins explains that a desiccated L.A. has “gone reptilian” and mammals are no more. 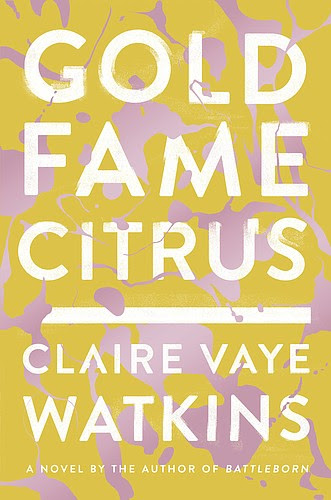 Hmm. Having just re-read Frank Herbert’s epic “Dune,” I hoped to discern some wisdom within the desert of “Gold Fame Citrus” akin to the that of the Zensunni Wanderers, or ecological knowledge like that of “Dune” planetologist Liet-Kynes; instead I found errors, California clichés, familiar characters, and literary tropes.
Exhibit one: a damsel in distress. Protagonist Luz is a needy young ex-model “born with a golden shovel in her hand,” with no direction or purpose. Exhibit two: her partner, Ray. A capable vet out of Leavenworth, nice enough, but not the hero type. Three: Levi, the charismatic mystic/hero/guru guy. And Four: the predictable west coast gypsy caravan of drugged-out “burners and gutter punks,” including an Earth Mother, buses, sweat lodges and tents.
You get the idea. Add experimental writing that includes computer questionnaires, changing typefaces, lists, abrupt shifts from third person to first person plural, and entire sections that contribute nothing to the story, and the trip is not as enjoyable as it could be.
It’s too bad, for Watkins obviously knows the Southwest land and its history, and strives to get some of it across. Sometimes her writerly devices work. Often her writing truly does shine, usually in phrases and sentences, though the first dozen pages of Book Two are great. The purpose that shows up for Luz (a waif named Ig) is charming, and a few surprises await to keep the reader intrigued, including this: just as the clichés and listless plot were prompting me to consider reading something else, I found tucked in the middle of the book an illustrated bestiary! Imagine that — ecological literacy, lessons being passed from teacher to student, who then carries the field guide everywhere she goes. “The world was made of unseen wonders, which we might call miracles,” says the teacher. Maybe Liet-Kynes is here after all. Book One read like a Southern California young-adult love story in a much-changed future (later on it’s not so YA), but with the prodding of the “Neo-Fauna of the Amargosa Dune Sea” that turns the seemingly lifeless desert into “a land of could,” I forged on to the end of the book. But it remained lifeless. Luz, which might mean light but sounds like loose or lose, personifies the difficulties of the book itself. Bestiary notwithstanding, she drifts without initiative, lacks spark, and is largely removed from the world. Countless forms of fiction of course exist, but for a story to resonate it ought to in some way address our hopes and dreams, or at least our expectations. “Gold Fame Citrus,” like the sands of the spreading Amargosa dune field, instead ignores them and marches blithely on.
''— Jake Vail writes for the Lawrence Public Library.''
Posted by DANIELBLOOM at 8:01 PM