Lauren Redniss creates a powerful ''cli-fi'' work of non-fiction (a graphic book rather than a novel), and it sings and flies high

Exquisite images trigger the sensations of terror and wonder that nature inspires, writes Philip Hoare, professor of creative writing, University of Southampton, and author of The Sea Inside (2013).
February 11, 2016 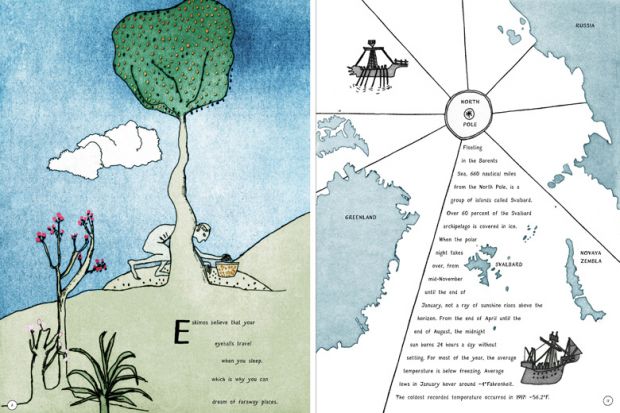 Scenes of fire and ice: Lauren Redniss’ illustrations add depth and nuance to her insightful discourse on weather
How do you write tellingly about something as amorphous as the climate? Or, indeed, about a subject so politically freighted?

Lauren Redniss, assistant professor of illustration, art, media and technology at Parsons the New School, lives in New York City with her husband and two sons.
She grew up in New England, and recalls “spending a lot of time with my grandparents, working at my grandfather’s small grocery store in Worcester, Massachusetts. Business was often slow, so I had time to draw and make things while waiting for customers behind the cash.
“I was always making things – papier-mâché animals for a carousel or leather moccasins or something out of leaves. My dad taught us a lot about the natural world, like how to identify different plants and insects, or he’d have us count all the seeds in a sunflower to see if they added up to a Fibonacci number. My mom was a dancer. The idea of being an artist was so natural it almost didn’t need to have a name.”
Redniss took her first degree at Brown University (wjere Andy Revkin of the New York Times DOT EARTH blog went, as well as Pamela Paul, editor of the New York Times Book Review). She was “extremely shy”, and “avoided much of what we (at least in the United States) picture when we say ‘college life’. I had a job in ceramic storage at the local art museum, and I used to copy down the object descriptions and turn them into little poems. (Terrible poems no doubt. Thankfully, I think they are lost now.) Or I’d go draw in the greenhouse.”
Of her work at Parsons, she says “it is nearly impossible to generalise about the students I teach. It’s a pretty international group, with widely divergent backgrounds and interests. I have a student painting with phosphorescent ink she grew from bacteria in a lab, a student printing 3D puppets, another creating an animation of her grandmother accompanied by the soundtrack of their conversation about her increasing dementia, someone else building large masks…”
She describes Thunder and Lightning (and her acclaimed previous books Century Girl: 100 Years in the Life of Doris Eaton Travis, Last Living Star of the Ziegfeld Follies and Radioactive: Marie and Pierre Curie, A Tale of Love and Fallout) as “‘visual non-fiction’. I tell true stories with a fusion of words and images. The combination of words and images seems completely natural to me – we are accustomed to it on television or the internet or in film – so why not in a book?”
She continues: “I hope that all of the design choices – the layout, the typeface, the particular placement of words and even of each letter – affect the way a reader makes meaning of the information on the page. The spaces between letters and arrangement of lines of type are all elements that control pacing and emphasis. I want to use these effects mostly on a subconscious level, because I never want the reading experience of my work to be laborious.”
The typeface for Thunder and Lightning, Qaneq LR, was designed by Redniss herself, and she also designed a font for Radioactive.
“Because the type is integrated into the images, I want the lines of the letters to be crafted with as much care as any other line in the drawings. Also, I’m a control freak. I report and write the book, I make the artwork and design the layouts. I can’t imagine then just slapping it all together with Times New Roman or whatever. I made Qanek LR with a slight forward tilt, as if being blown by a gentle breeze.”
Has she a favourite of the far-flung locations she travelled to for Thunder and Lightning? “Many of the places I visited were extreme in one way or another, but Newfoundland is just extremely beautiful.”
If money were no object – let’s imagine a wildly lavish publisher and an unlimited budget – what kind of book would she like to make? “Life size, 5000 pages, black-lit, inflatable, anti-gravity.”
What gives her hope? Redniss replies: “My children. My husband and my friends. Also, invisible ink, going to the Metropolitan Museum, listening to pop music, and reading P. G. Wodehouse.”
Karen Shook
Posted by DANIELBLOOM at 6:36 PM