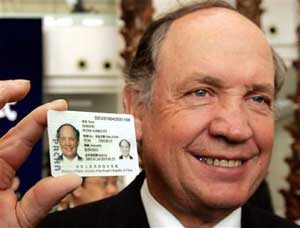 What would James say?


The is second rightwing piece by the same author at the same website in a week, from the USA, by the same author, a nice guy who seems to know a lot about cli-fi novels and movies, and writes about TIMESCAPE here, from 1980, but in general he is criticizing the use of tax-payers money to fund public and private colleges for the teaching of cli-fi classes on USA and UK campuses. If YOU have time and inclination, you can leave a polite COMMENT at his post and let him know YOUR feelings. His name is Dave Huber, in the DC area, a good guy (but on the other side of the debate) and a 50-something high school teacher who also moonlights as a writer for this rightwing site called THE COLLEGE FIX

More ‘cli-fi’ in the college classroom: Great (and and not-so-great) climate doomsday stories

It seems my article from last Saturday about the use of “cli-fi” — climate fiction — stories in various college courses attracted a bit of attention.
Dan Bloom, who coined the term “cli-fi” in 2007, has a site devoted to news and stories about the genre. I had linked to a post of his, and upon discovering my column he tweeted news of it out to all of his followers. This included Vanderbilt’s Ed Rubin, who’s begun teaching a couple of courses on cli-fi.
Rubin reacted to a couple of points in the piece; you can decide for yourself if his claims hold any water.
Bloom has since kept me in the loop about various writers’ and bloggers’ opinions regarding climate fiction stories. Some I agree with, but I many I don’t … mainly because they seem to have been chosen due to fitting an ideological agenda instead of actually pertaining to the subject.
The University of Winnepeg’s Heather Snell’s course description for a class which includes cli-fi is another example:

We study various theoretical and critical strategies for reading YA [Young Adult] texts, including feminist, queer, transgender, postmodern, posthuman, postcolonial, critical race, cli-fi and ecocritical; cultural assumptions about children and childhood; trends in educational theory and practice; the economic and political contexts of the production, consumption and marketing of YA texts for young adults; and popular culture and media for young adults.