Rafi Letzter at Tech Insider site blogs about how ''cli-fi'' is slowly, glacially, replacing sci-fi as the default genre for climate novels and movies 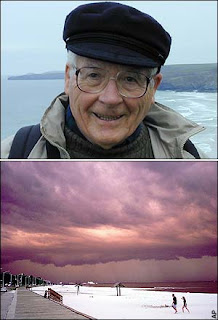 [with  some minor edits from the clarification and amplification departments]


We drove a big chunk of the way across the country recently, moving everything I own in the back of a compact sedan from Chicago to New York City.

Our route skirted the tip of Lake Michigan, then traversed the whole southern expanse of Lake Erie before climbing into the Poconos.

It was deep winter in the Upper Midwest and Appalachians, but so warm that my girlfriend rode shotgun with the window open.

I played an audiobook of Cixin Liu’s alien invasion novel “The Three Body Problem” as the unseasonable, leafy January landscape slipped past.

The book is a remarkable, Hugo-winning work of science fiction writing, published in Mandarin in 2006 and English in 2014.

But it already seems out of step with the new year in which we encountered it.

Liu’s story centers on the life of Wenjie Ye, a child of the [Communist China's ugly] ''Cultural Revolution'' [square qotes for emphasis] ] who lives out her middle age imprisoned in the ruins of one of China’s razed forests. Having witnessed the sins of humanity against itself in the first part of her life, and of humanity against nature in her middle age, Ye embarks on a mission to replace the human order with the extraterrestrial. The species has failed to care for itself or the planet, she decides. It’s time for another to take over.

That climate radicalism dilutes enough in the so-called sci-fi novel’s political and personal dramas that you could almost miss it. Liu holds its ideas arms length, placing them in the mind of the novel's antagonist — though she is also the character he renders most lovingly. He never writes the phrase “climate change” or “global warming."

The subtext is unquestionable: our species’ environmental recklessness has put everyone in danger. But it’s a theme you have to sift through the plot to notice. The book’s real terror sails through outer space.

Heard on an unsettlingly green American highway a decade after its original Mandarin release, “The Three Body Problem” has a light touch with climate anxiety that seems quaint. The deus-ex-machina of an alien invasion now comes across as an unnecessary amplification of the book’s underlying worry.

Simple warnings of climate catastrophe lose the unsettling power they carried even a decade ago. So Liu's story faces the same problem as the didactic “Inconvenient Truth” (also from 2006), or the hyperventilating “Day After Tomorrow” — though it's still much, much more interesting. This is less a critique of his work than an observation of the speed with which the climate conversation has advanced in science fiction, [turning now to cli-fi iostead].

Riding with the windows down in that car, my girlfriend and I traversed a palpably altered American landscape. At 23 and 24, most years in our adult lives have set all-time heat records. It’s difficult to link any single weather event to climate change (though scientists are getting better at it). But that Spring-like road trip just after New Years joined the heap of bizarre experiences that seem to define all major encounters with the weather this decade. God, it's like April out, we repeated back and forth. The scientific uncertainty on the local level makes such strange phenomena more alarming, not less. Speaking for myself, my climate fears no longer sublimate easily into fantastical tales of alien invasion. Instead, they've taken on layers of practical and existential concern:

How bad will it get in my lifetime? In my children’s [and 30 generations hence]? Is it even responsible to have children on a planet on the verge of cataclysm? How will we treat each other in this new, transfigured world?
The most provocative [cli-fi novels] I've read in the last several years focus on how the deformed climate will change our lives.

Paolo Bacigalupi’s book “The Water Knife” takes an overview approach to our impending history. The thriller focuses its lens on a point several decades in the future. It sees an American Southwest water-starved and carved into feudal nation-states warring around a drying Colorado River. Desperate for water, Arizona's and Texas' luckless inhabitants attempt mass migrations into their moisture-rich neighbor states, but militias close the borders and turn them away.

On a more human level, a whole class of character-driven [cli-fi] has emerged against the backdrop of our climate future.

Monica Byrne’s “Girl in the Road” imagines from the perspective of two migrants how global identity and power will play out as our planet warms. The wrenching play “Lungs” by Duncan Macmillan tells a love story over decades as Earth’s resources deplete. “The Book of Strange New Things” flips “The Three-Body Problem” premise around, looking at the impact our species’ culture might have on aliens as we flee the Earth — and how a few lucky refugee Earthlings might handle abandoning a planet in disarray.  Kim Stanley Robinson offers a hopeful take on how humanity might eventually choose environmental stewardship in “Aurora”.
These stories are variously grim, weird, upbeat, and apocalyptic. But I usually feel better about the future after reading them.

Their authors assume that humanity has forever damaged this world’s weather patterns. That’s a major transgression against the spirit behind initiatives like the Paris climate deal. But it’s more in line with what most scientists expect. In grappling with the hard realities of our future, far from the optimism of activism, these authors offer clarifying, ungarnished visions forward into the unknown. Even Bacigalupi’s unhappy Arizonan vista offers more clarity than a thousand temperature graphs. With the debate over climate science long over, its past time we dealt with its subjective, human questions. And [cli-fi] remains the best space to think about an unformed future in human terms.

This isn’t an argument against science or activism. If we don’t improve our understanding and change our laws, future road-trippers might stop on Lake Erie's beaches in January for some sunbathing. But for those of us already sold on our necessary climate anxieties, speculative fiction [and especially the rising new genre of cli-fi] lends this future enough reality to explore.

Posted by DANIELBLOOM at 6:05 PM