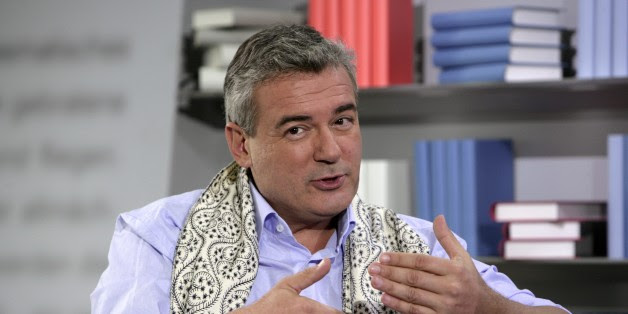 The Lamentations of Zeno

A Cli-Fi Novel By Ilija Trojanow, [a German-Bulgarian novelist, writing in German]

It's also a kind of travelogue: Ilija Trojanow has written many travel books as well as fiction.

A professor friend who knows German literature from A to Z tells this blog in a midnight email:You want to know about cli fi novels in German?

“There is little that a novelist can tell us on the subject that we do not already know, but Trojanow gives the statistics and prognoses a human dimension … one of Europe’s most original contemporary writers.” – UK Times Literary Supplement

“The Lamentations of Zeno is electric, irresistible, well written and movingly topical cli-fi. Ilija Trojanow, with several masterpieces to his name, never puts a foot wrong. He is as important a writer in this day and age as Günter Grass was for his—a joy to read.” – Nuruddin Farah, author of Hiding in Plain Sight

Ilija Trojanow, German Writer, Banned From US For ...

翻譯這個網頁
2013年10月1日 - Ilija Trojanow, German Writer, Banned From US For Criticizing NSA ... According to Der Spiegel, German-Bulgarian writer and activist Ilija Trojanow was barred from .... Get top stories and blog posts emailed to me each day.

Ilija Trojanow, German Writer, Banned From US For Criticizing NSA

According to Der Spiegel, German-Bulgarian writer and activist Ilija Trojanow was barred from entering the United States on Monday. Trojanow was to speak at a literary conference. HuffPost Live’s Ahmed Shihab-Eldin took a closer look at the story, which has yet to be covered by most major news sources in the U.S.

While U.S. authorities did not provide Trojanow with a formal explanation, he believes he has been banned from the US because of his outspoken criticism of the NSA’s surveillance programs.

In an article published in the Frankfurter Allgemeine Zeitung, Trojanow voiced his frustration with the incident. “It is more than ironic if an author who raises his voice against the dangers of surveillance and the secret state within a state for years, will be denied entry into the ‘land of the brave and the free,'” he said.

Trojanow has written an open letter denouncing the NSA in addition to signing a petition that asks German Chancellor Angela Merkel to forcefully oppose NSA surveillance. He is a professor at The European Graduate School and co-author of a book that examines the surveillance state, with fellow German novelist Juli Zeh.
Zeh also expressed outrage following Trojanow’s detainment in an airport in Brazil. A Facebook post by Zeh, loosely translated, reads, “ This is a farce. Pure paranoia. People who stand up for civil rights are treated as enemies of the state.”
News of Trojanow’s denied entry into the U.S. coincided with the announcement that the U.S. government had been shut down by Congress.
Correction: An earlier version of this story indicated that Trojanow had been invited to the United States by Congress. He was not invited by Congress, but by a literary conference in Denver.

In Ilija Torjanow’s climate change novel Eis Tau (2011), humankind is explicitly held responsible for climate change. This time, however, the accuser is one of them: Zeno Hintermeier, the novel’s protagonist, is convinced that humankind will destroy everything “that places itself on nature’s side”. As a glaciologist and the leader of cruise ship exhibitions in the Antarctic, he becomes a key witness to the environmental destruction that goes hand in hand with technological progress exploited for tourism: the Antarctic, formerly a desolate continent of courageous explorers, can suddenly be “conquered” even by old-age pensioners thanks to modern ships.
In Eis Tau, Zeno’s elegiac grief at the melting of the poles serves not only to give greater emphasis to the “inconvenient truth”; it also serves as the basis for a more general criticism of human ignorance about climate change, the destructive power of which is embodied in particular by the tourists on board the cruise ship. Zeno condemns this through an act of self-administered justice: he throws himself overboard, thereby abandoning the tourists to their fate.