WHY WE SHOULD GO GREEN! 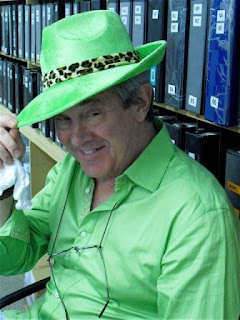 H. Steven Moffic, MD, has spent most of his 20-year career developing and leading behavioral healthcare systems, ranging from community mental health centers to capitated managed care contracts. He cares about Earth, and he sees the future now through he eyes now of his grandchildren!

You may have heard of the legendary frog experiment. A frog thrown into boiling water will jump right out. However, a frog that is thrown into warm water that is gradually heated to boiling, will stay right there until cooked alive.

Is this a metaphor for so-called global warming, or perhaps in more psychologically effective terminology, global boiling? And, even if it is, why is that of particular importance to us in behavioral healthcare? After all, don’t we have enough problems right now with financial challenges, health reform, stigma, and treatment resistance, to name but a few of our everyday work stressors?

Yes, we certainly do have enough to worry about. Yet, it is precisely because of our specialized knowledge of behavior that we may be the key to addressing this challenge. As Dean Speth of Yale stated not long ago in a special issue of Yale Alumni Magazine on Yale’s Big Green Experiment: “We now need to hear more from . . . people who understand the wellsprings of human behavior and values”.

Of all people, we should understand and appreciate that our brains are hardwired to attend to immediate danger, not potential risks years hence. This is the well-known fight-or-flight response that we saw immediately after September 11, hurricane Katrina, and the Haiti earthquake. Future risks bring more of what I call a hug-and-shrug response.We should know, as the psychologist Maslow taught us, that we have to prioritize basic needs such as safety and security. If industrialization supported by fossil fuels helped us to feel safer, secure, and ever more successful, yet had the side effect of dangerous carbon levels in the atmosphere, the benefits will usually win out.

Indeed, we should know how hard it is to change behavior and tolerate uncertainty. To overcome this, per Skinner’s behavioral modification principles, stronger priorities, positive behavioral rewards, and less negative reinforcement will be necessary.

These tendencies fit Freud’s defense mechanism of denial, whereby we can consciously, or unconsciously, prioritize what is most valuable to us at any given time, and ignore the rest. Threatening that invokes resistance to change, which we see so often in our work, especially with the AODA population.

We can also project the psychiatric casualties from climate change, or as I would reframe it, climate instability. There are many canaries in the coalmines, as that saying tragically rings true more than ever. Undue heat is associated with more violence. Environmental change, such as is occurring in the drought areas of Australia, is causing a variation of grief termed solastalgia, which is being homesick while still living in a changed homeland. People that do have to leave their slowly changing environment, as in Bangladesh, are subject to Posttraumatic Stress Disorder and depression. They have been called climate refugees. Our military leaders now realize that this climate instability can destabilize the world in intense competition for scarce resources.

There is so much we can do to help, even with all our other challenges. Certainly, in our private lives, we can model behavior that is friendly to the environment. The President of Yale drives a Prius, So does my son, who never fails to remind me that I still drive an older, gas-guzzling Toyota. My wife reminds me that I still do not turn out the lights and use too much paper. I guess I’m a good example of do what I say, not what I do, and how hard it is to break undesired habits. If so inclined, we can become politically involved, for as Al Gore recognized, we need both personal and political global change. Our workplaces can reduce unnecessary energy consumption.

We can even wear more green for a kind of subliminal message. Gandhi knew this when he decided to dress in a traditional Indian loincloth and said: “You must be the change you wish to see in the world”. If you’re asked why you are now wearing more green, you can expound on why going green is good for our mental health. If you do this, let me tip my green hat to you!
Posted by DANIELBLOOM at 4:09 AM