Crude Awakening, Polar Cities and The Future of the Human Species.... 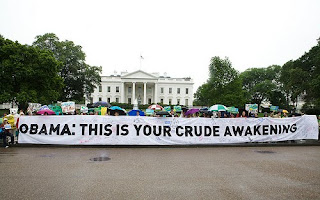 I just got back to the 350 office here in Washington DC, and my feet are soaked. It’s been drizzling all morning, and me feet got soaked — but the rain didn’t dampen the spirits of the more than 100 concerned DC, Virginia and Maryland residents who showed up for a march from the Department of the Interior to the White House.
We carried a banner that read “OBAMA: THIS IS YOUR CRUDE AWAKENING” that traveled all the way from New Orleans, where gulf coast residents wrote messages to the President and signed the banner. Their messages about their families, favorite places to fish and lie on the beach and the jobs they’re losing becuase of the oil disaster were incredibly powerful, and I felt their words resonate as we rallied.
We marched to the White House to send Obama a message that fossil fuels are not worth the cost in lives and livelihoods, and that this moment must be a crude awakening for our politicians: It’s time for President Obama to lead on clean energy, to end offshore drilling and to solve the climate crisis.
We have the opportunity to create clean, secure jobs, protect wildlife, our coasts, and prevent disasters like this one from ever happening again. But we can’t do it by subsidizing fossil fuels or through giveaways to oil, gas and coal companies. BP made $6 billion in profits in the first quarter of this year alone, and yet they didn’t spend $500,000 on a safety valve that could have stopped the gusher almost as soon as it happened. Obama’s Department of the Interior approved the rig without demanding any proof that it would be safe — BP’s disaster preparedness plan was “Don’t have a disaster.”
This is a moment when our politicians need to wake up and call the gulf oil disaster what it is: a terrible example of what fossil fuels are doing to our planet. But it’s even more. It’s an opporunity to help the people of the gulf coast and the rest of the world switch to clean, safe energy and away from destructive, polluting fossil fuels. Anything less would be cowardly and irresponsible.

nickengelfried COMMENTED
May 12th, 2010 at 12:26 am
The tragedy of the BP Oil Spill should be a wake-up call to politicians everywhere, and this is a great example of how climate activists can remind decision-makers that the onus is on them to eliminate our dependence on oil. Obama’s response to the Gulf disaster has so far been disappointing and insufficient. It’s time for those in power to wake up, indeed.

Posted by DANIELBLOOM at 5:02 AM