Last typist refuses to switch to laptop, gets boot from Writers Room in Greenwich Village

Rich Sharpiro at the Daily News in NYC writes on May 20... 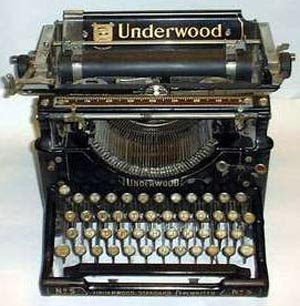 The ribbon has run out on the last typewriter at a Manhattan writers' den.


Skye Ferrante has spent six years at the Writers Room in Greenwich Village, blissfully banging away on his grandmother's 1929 Royal typewriter.

The 37-year-old writer represented a bygone era, the last typewriter-user in a special room devoted to typists.

"In the event that there are no desks available, laptop users must make room for typists," read a sign posted in the "Typing Room" for years.

When Ferrante returned to the Writers Room in April after an eight-month break, the sign was gone and his noisy typewriter was no longer welcome.

"I was told I was the unintended beneficiary of a policy to placate the elderly members who have all since died off," said Ferrante, a Manhattan native who's writing children's books. "They offered me a choice to switch to a laptop or refund my money, which to me is no choice at all."

Ferrante was peeved, but not completely surprised.

A growing number of scowls had replaced the smiles that once greeted the arrival of his black, glass-key typewriter.

"The minute the sign came down, I realized there was antagonism from some of the new members," he said. "They gave me an attitude when they saw me setting up the typewriter."

Ferrante's connection to typewriters runs deep. He owns at least five of the old-school machines, his devices of choice since his teens.

"There's a different commitment when you know you're making a mark on the page, when you strike a key and bleed ink on the page," he said.

After being contacted by the Daily News, Writers Room officials told Ferrante he can continue working on his typewriter until the end of his term on June 30.

Executive Director Donna Brodie said staffers didn't realize Ferrante was a typist when he rejoined. All the others had died or converted to laptops.

"It would mean that everybody else who wanted to work in that room would flee," Brodie said. "No one wants to work around the clacking of a typewriter. That's why the room had been established."

Writers pay $1,400 a year for access to the airy haven of private cubicles on Broadway near Astor Place.

Maria Laurino, a regular, was baffled by the sudden ban.

"Skye has been here for years, and there's never been an issue," said the Manhattan essayist. "I'm surprised as to why there'd be an issue now."

Ferrante said he's so bitter he doesn't plan on returning.

"Some people like to listen to vinyl. Some people prefer to drive a stick shift," he said. "I just wish that there were some typists out there that would back me up, but I don't know any."

I NEED TO SAY THE FOLLOWING: I HAVE BEEN A MEMBER OF THE WRITER'S ROOM FOR YEARS. I LOVE THE WRITER'S ROOM. THEY ARE AN AMAZING ORGANIZATION AND THE STAFF IS SECOND TO NONE -- ACCOMMODATING, FRIENDLY, GENEROUS , AND TOLERANT. THE PROBLEM, FOR ME, IS NOT THAT SKYE USES A TYPEWRITER. WHAT MANY WRITERS WILL TELL YOU IS THAT THE REAL PROBLEM IS THAT HE IS A RUDE, THOUGHTLESS, HIGHLY AGGRESSIVE ****. I HATE TO SAY BAD THINGS ABOUT PEOPLE, BUT THAT'S THE GOD'S HONEST TRUTH. I HAVE WITNESSED HIS BAD BEHAVIOR PERSONALLY AND REPEATEDLY. I GET ALONG WITH EVERYBODY, AND MY MOTHER ALWAYS TOLD ME; "IF YOU DON'T HAVE A KIND WORD, KEEP SILENT". BUT THIS ARTICLE FORCES ME TO DISREGARD MY MOTHER'S ADVICE. SKYE IS AN OPPORTUNISTIC **** LOOKING FOR HIS 15 MINUTES OF FAME, AND SADLY, YOUR PAPER FELL FOR IT. PEOPLE "BREAK THE RULES" AT THE WRITER'S ROOM ALL THE TIME, AND BELIEVE ME -- THE STAFF AND FELLOW WRITERS ARE ALWAYS TOLERANT, AND ALWAYS SEEK TO "LIVE AND LET LIVE". BUT TRUST ME, IF IT WAS SOMEONE ELSE....

Bryan Nelson says:
he can come over and type at my house any day! I find the sound of clicking and clacking very soothing... My friend Kevin Stack, flying with an Olympia portable, broke it out at an airport bar and got lots of stares, but nobody asked him to stop.