Li Keqiang will be the "Chinese Gorbachev" who sets his people free in the future: PREDICTION! 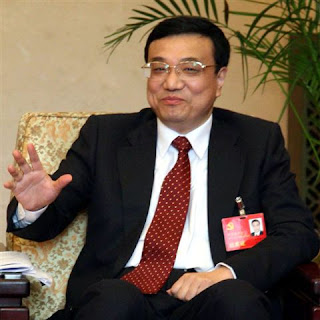 When Willy Lam of Akita University in Japan recently addressed the European
Chamber of Commerce Taipei in Taiwan about his views on China's
future leaders, he noted that current PRC Vice President Xi Jinping is expected
to take over from Hu Jintao as president and general secretary in
2012, while Vice Premier Li Keqiang will likely succeed Premier Wen
Jiabao.

Since the Chinese Communist Party very much wants to avoid the rise of a
"Chinese Mikhail Gorbachev" -- remembering well what happened to the old
communist Union of Soviet Socialist Republics when Gorbachev opened the doors to freedom -- it will make sure that
no leader is allowed to introduce any reforms that could threaten its
iron grip on power.

But watch out, China.

Li Keqiang, a smart man still in his 50s who
speaks fluent English and has been exposed to Western ideas, will very
likely be the Chinese Gorbachev who sets his people free when he
becomes president of China in the future. Of course, this prediction
is just idle speculation. But good luck, Mr Li, and Godspeed!
Posted by DANIELBLOOM at 7:53 PM