There's a disconnect in America...... 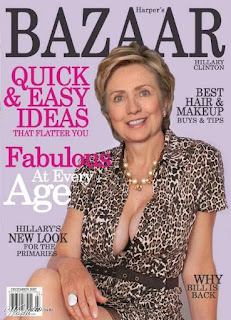 Example: There's the oil spill in Louisiana and the Times Square bomb attempt....and the media goes to a humor dinner at the White House Correspondents Dinner making jokes at the same time. There is a disconnect in America!

Example 2: Larry King Live CNN show with Jim Morey as host: he is interviewing people about the murder of a college woman by her boyfriend, and the two female talking heads appear on TV wearing low-cut top showing cleavage. Are these PHDs not aware of the topic they are on air to discuss? And they show up wearing cleavage clothes? The male guest wore tie and jacket. There is a disconnect in America.


On same show, as the guests are discussing murder and male violence, the news crawl at bottom of screen shows a news headline for promoting King's CNN blog that reads "Betty White says it's been a long time since she's been manhandled." haha, FUNNY? There is a disconnect in America. Don't editors see these things?
Posted by DANIELBLOOM at 3:39 AM

Betty White: "It's Been A Long Time Since I've Been Manhandled"