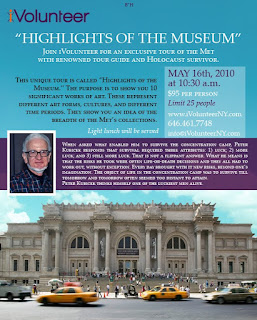 [Peter Kubicek is a Holocaust survivor
who also works as a volunteer docuent guide at the Met Museum.
According to Mr Kubicek, iVolunteer is an organization that sends out
young volunteers to assist aging
Holocaust survivors who live alone, have no family, frequently have medical
problems or disabilities, as well as financial problems.
When he found out about them he says he was much impressed with the
fine, selfless
work they do and he sent them a financial contribution. One thing led to
another and some of the iVolunteers are now planning the tour of the
Met on May 16 with Mr Kubicek, as a
fundraiser for the organization.]

What is iVolunteers all about?

When Terry Nayman was 14 years old in Poland she saw Nazis burn her
father’s beard and knock her mother’s teeth out. She never imagined
that 70 years later she would talk to two people about it in her Lower
East Side apartment.

Though Justine Gundelfinger, a South African model and actress in her
20s, Sonia Nusenbaum, a Polish Holocaust survivor in her 60s, and Mrs.
Nayman, now 84, made an unusual group, they spoke for hours. Ms.
Gundelfinger has befriended seven more Holocaust survivors in New
York. A videoincluding her description of her work can be found here.

She met them through a program called iVolunteer that matches young
volunteers with some of Manhattan’s roughly five thousand Holocaust
survivors to alleviate their loneliness.

Elisheva Tauby, 26, and her husband Tzvi founded iVolunteer in
September 2007. “It’s primarily for companionship,” and often goes
beyond that, Mrs. Tauby said. She also founded a similar group in
Brooklyn, Connect2.

Even for those with families, there are special considerations. “A lot
of survivors were very hard on their kids,” Mrs. Tauby said. Sometimes
“the kids don’t want to have anything to do with them.”

Ms. Nusenbaum, who never married, supported Mrs. Tauby’s claims. Ms.
Nusenbaum made it to America after years in German refugee camps with
her mother, the only living member of her family.

“I would buy my mother a gift,” Ms. Nusenbaum recalled, “and she would
yell at me.”

Mrs. Tauby said many survivors eventually “look at the volunteer as a
part of their family.”

Yet the survivors do not simply receive charity. They often become
surrogate relatives for volunteers from outside the city like Ms.
Gundelfinger.

Ms. Gundelfinger said she missed her paternal grandparents, both
Holocaust survivors, who have died. “If I could have another day with
them … I dream about that,” she said.


Mrs. Nayman showed off a family photograph.Mrs. Nayman showed everyone
prewar photographs of her family. When she was 17, the Nazis sent her
to another family in the Lodz ghetto. From there she was transported
to Auschwitz, then forced to work in an ammunition factory in
Bachledova, Czechoslovakia, until she was liberated, without a living
relative.

She married her husband, Isaac Nayman, in Germany in 1946, shortly
after liberation. They eventually came to New York City, had a son and
a daughter, five grandchildren, and two great-grandchildren, who visit
when they can.

Mrs. Nayman tries not to let her Holocaust experience affect her daily
life, but said she sleeps poorly, lying awake asking herself: “Did I
have parents? Was I always alone in the world?”

“I’ve learned what true suffering is,” Ms. Gundelfinger said. “I feel
that I’ve seen a change in myself … and a change in them. And it’s a
positive change, and that’s what makes me feel like I must continue
the friendships.”
Posted by DANIELBLOOM at 8:38 AM