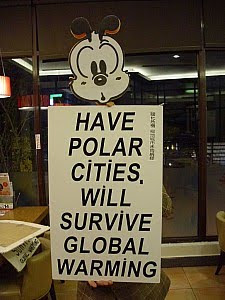 Okay, it's not something most people want to think about. Death. Massive human die-offs in the late 24 Century. Survivors of major global warming impact events in the distant future -- the far distant future, mind you! -- making their way north (and on foot, mind you!) to "polar cities" in northern regions of Alaska, Canada and Russia. Where humans will survive for 10,000 years until it's safe to come out and repopulate the middle regions of the world again. When climate gets back to normal.

But this scenario is exactly what climate activist Danny Bloom wants Americans to think about in the here and now with his bare-bones signboard ad campaign on the Internet.

What's he selling? Survival of the species, he says -- the human species. Surviving what Guy McPherson calls the "climate bottleneck" we are now in. Helping future generations for what Glenn Albrech calls "solastalgia", which is when solace meets nostalgia (Google the term).

So Bloom is taking his ideas to a global ad campaign that is not about selling a product or moving product. "This is a wake-up call about climate change and global warming," the 1971 Tufts grad says. "This is about getting future generations ready to face the future. We're okay now. Life is wonderful in the here and now."

Whatever Bloom is doing, he's certainly out in left field, thinking outside the box, pushing the envelope of normal climate campaign ideas. Bloom says it's too late to stop global warming. "That's why I am calling for the creation of polar cities as safe refuges for climate refugees in say, 2323 AD or so," he says without batting an eyelash. "I'm serious."

He's so serious he has created the ad image above (and this accompanying ad copy) in order to turn a few heads and get people thinking ... outside the box.

Good luck, Mr Bloom! We're sure nobody will pay even the slightest attention to your cockamie ad campaign. And who's the character above, holding the sign up? Did you license that image?

PS: Bloom tells AdRants his next step is installing the above image as a billboard in Times Square about Nate's Steakhouse. Next to the Naked Cowboy. O boy!
Posted by DANIELBLOOM at 8:28 PM