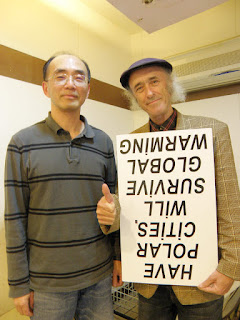 Danny Bloom calls his speculations about the future and the possible need for polar cities in the distant future as THE EXODUS STRATEGEM. It means that in the future, humans MIGHT have to take part in a mass exodus from tropical and temperate zones and migrate north to Alaska and Canada and Russia, to survive in polar cities in the north and in New Zealand and Tasmania, too. Sounds like a sci fi movie, I know.

"Of course, it's not a theory at all, and it's not even a hypothesis," he said. "It's more of an EXODUS speculation, to 1. wake people up and 2. to point the way to a possible adaptation solution that just might work."

Rememer the Exodus story from the Hebrew Scriptures? This might be a new Exodus, with or without the blessings of God. It's up to us humans to make sure this never happens. BUT time is running out. Time may have already run out. And if so, we might really need polar cities some day. God forbid. It won't be a pretty picture!

Definitions of stratagem on the Web:

ploy: a maneuver in a game or conversation

contrivance: an elaborate or deceitful scheme contrived to deceive or evade; "his testimony was just a contrivance to throw us off the track"

A confidence trick or confidence game (also known as a bunko, con, flim flam, gaffle, grift, hustle, scam, scheme, or swindle) is an attempt to ...

From Old French stratageme < Latin strategema < Ancient Greek στρατήγεμα (stratēgema), “‘the act of a general, a piece of generalship’”) < strategein (“‘to be a general, command an army’”) < στρατηγός (stratēgos), “‘a general, the leader or commander of an army’”); see strategy.

strategy
Posted by DANIELBLOOM at 5:57 AM