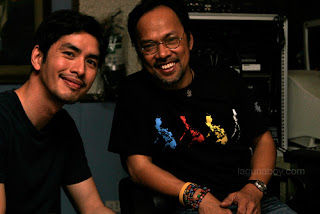 
By YUGEL LOSORATA .....reporting in the Philippines, which by year 2500 AD will also be abandonned by the entire population who will have moved north to Alaska, Canada and Russia to survive global warming in polar cities: see http://pcillu101.blogspot.com (God bless the Philippines, but know Noel that your great nation will be no more by year 2323 AD. Help the people there prepare for what surely is coming. Don't believe me? Read Dr James Lovelock. He knows.

Noel Cabangon contributes his songwriting prowess to the call for action on the issue of climate change. The song “No Time To Waste” became the anthemic number for the 12-hour concert “Tiktokrok: Rock for Climate Action” last month initiated by some artists’ “solidarity on the global movement for climate action.”

“Climate change is happening around the world and no one is spared from its cruel impact. Act now while we still have enough time to avert another catastrophy,” Cabangon said.

We can still reverse this human curse to save Mother Earth."
Musician Noel Cabangon composed the campaign anthem “No Time to Waste" that issues an urgent plea and warning for people to protect the environment before the climate crisis causes more disasters.

Aside from promoting climate change awareness, Cabangon hopes the song will encourage more people to focus on calling on President Arroyo to stand firm and defend the Philippines among developed countries that are mainly responsible for carbon emissions that cause climate change.

“Climate change is already here. How do we reverse the impact? We have to tell the developed countries to reduce the emission of carbon para mabawasan ang pagbago ng panahon," he explained. “Naging mayaman silang mga bansa at the expense of the Third World countries. Kinuha nila ‘yung mga resources nation. We are seeking climate justice from the plunder that the developed countries have done to Third World countries."
Posted by DANIELBLOOM at 5:47 AM