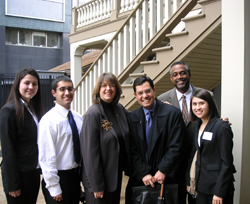 Professor Karen Ford, associate dean of the College of Arts and Sciences at the University of Oregon, said in a quote in a UO press release about a new academic book by a team of UO editors focusing on teaching climate change in university classrooms, link HERE, that given the developing nature of the field, it’s not surprising that the project grew out of a grassroots, or what she calls a “classroots,” graduate program at the UO.

“The humanities offer nuanced ways into complex problems like climate change, bringing the powers of language, interpretation and imagination to data produced by other fields of study,” Ford said. “And given the severity of the consequences of global climate shift, it's time to bring all aspects of our intelligence as humans to bear on the problem. So a book like this is important and timely. It offers the distinctive capacities of the humanities in teaching, communicating and envisioning change.”

This blog loved the new coinage and sent a note to Professor Ford to tell her so. When we asked how she coined the term, how it came to her, she replied by email:

"Good morning, Dan.  I think I did coin it  At least, I never heard it before I wrote it.  When: when the UO PR office asked me to comment on the upcoming collaborative textbook; how: just writing along and out it came (it made a kind of wonderful sense); more: no more to tell except that I've heard about you and "cli fi," which is a marvelous and influential coinage.  Thanks for your work, and thanks for noticing "classroots."

She added when I asked for amplification: "The only thing I could add is that Stephanie LeMenager's commitment to public humanities and her recognition of the importance of pedagogy in the public humanities have been inspiring to me.  The climate change textbook collaboration, coming out of her classrooms and her work with students like Stephen Siperstein and Shane Hall, shows us the possibilities of collaborative pedagogy.    At a time when many of our students are fearful about their future livelihoods and worried that humanities degrees aren't "practical" (nothing could be further from the truth, of course, since language, literature, philosophy, history, folklore, the arts, and the performing arts offer understanding, aesthetic experience, and skills that are essential for not just financial success but for survival), the vivid contrast between Ivory Tower and classroots as ways to figure the university is revelatory.''
Posted by DANIELBLOOM at 8:18 PM