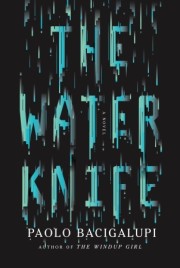 Bradley Campbell, host of  Public Radio International’s “The World” interviewed Paolo Bacigalupi last night. Bacigalupi, as our readers probably know, is the author of several works of cli-fi, including novels The Water Knife, The Wind-Up Girl, and a collection of short stories titled Pump Six.

Mr Campbell, who hailed Bacigalupi as a leading light in a NEW  LITERARY movement dubbed “cli-fi” (”climate fiction”), spoke with the author about what inspired him to write The Water Knife and his thoughts on what the world of tomorrow might look like. Bacigalupi said that The Water Knife was an example of a worst case scenario: one in which society doesn’t prepare at all for the effects of global climate change:

While Bacigalupi is speaking about his own work, this cautionary element—exploring the potential consequences of scientific technology—has been a valuable and essential part of SF from the very beginning of that genre. Although many consider it a work of gothic horror, Mary Shelley’s Frankenstein is also commonly (and perhaps more appropriately) recognized as history’s first science-fiction novel. Shelley wasn’t a scientist, but having been raised in a politically radical family that supported her intellectual exploration and encouraged her to be more than just someone’s wife. She was educated, independent, and socially informed.

The late 18th and early 19th centuries were marked by phenomenal scientific achievement. Shelley wrote the story that would become Frankenstein in 1816, when she was only 19 years-old. John Dalton had proposed his Atomic Theory of chemistry only eleven years prior, and five years before that Alessandro Volta invented the battery. She grew up in a world that was well on its way to modernity, and was keenly aware of technology’s growing influence on society at large—both good and bad. Frankenstein was, and remains, an excellent cautionary tale about the peril of scientific advancement divorced from humanity.

Shelley’s novel reflects the prevailing concerns of that era, one in which the seemingly god-like and morality-free powers of science had filled a vacuum left in the collapse of religion and traditional morality. Like many of the writers who followed in her footsteps, kept her descriptions of the actual technology used in Frankenstein’s laboratory vague because he story isn’t about technology itself: It is about the potential consequences of its misuse; the “what-if” rather than “how-could”.

Similarly, “cli-fi”, as a new literary genre and not part of the science-fiction genre at all, warns us that we’ve abused the world so much that it could soon be beyond our ability to repair: that we’ve failed to heed Shelley’s warning. If we ignore those of Bacigalupi and his peers we may not get another chance.
Posted by DANIELBLOOM at 12:36 AM