Into the Future with ''Cli-Fi'' in Taiwan: University course proves popular with students on a subtropical island 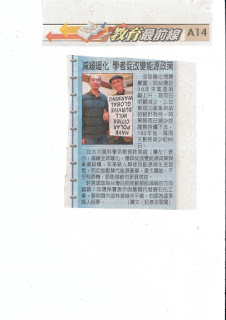 In 2016, students at National University (NU) in southern Taiwan who talked about taking a new climate-fiction [often called "Cli-Fi" as a nickname] course were often met with incredulous stares from their peers. The three-credit course, Introduction to Cli-Fi, explores how cli-fi reflects a culture's dreams for the future.  Word of the class and the professors' unique teaching methods spread quickly, and the students relished the opportunity to spar with their professors over just what the world was coming to in terms of man-made global warming and how literature and movies might help move mountains, so to speak.  Students who are taking the class gush with enthusiasm about their days in the classroom, making what was at first an oddity into a campus phenomenon.


"The teachers are incredible," says David A. Lee,  a human science and sociology student. "They know everything there is to know about cli-fi."  The course at National University was put together by two NU professors. Dr Chen and Dr Wu,   and the 60 available seats in the class were hotly contested. The cli-fi term itself was coined by an elderly American journalist and climate activist living in Taiwan.

"This class encourages critical thinking," Allen Yu, another NU student, says. Students are welcome to challenge the speakers and this interaction helps students see things from different perspectives.  "We grew up with Hollywood movies like 'The Day After Tomorrow' without giving a thought to what was behind them," he says.

"The professors questions that often come to me as a shock. The cultural implications and influences behind what I read and see never crossed my mind before I took this class. It never occurred to me that many materials our parents discouraged us from looking at could be a subject of study."


Although its two professors are from backgrounds as diverse as ecology  and American literature, the cultural aspect of the course content is what interests them both. Chen believes that cli-fi pushes the development of real climate science, not because it provides answers, but because it reflects a culture's ideas of what can happen and gives that vision direction.


Wu, on the other hand, believes cli-fi can stimulate critical thinking and wants the public to give due respect to the genre. "I emphasize the climate science angle. I have no intention of scaring the students off with scientific climate change formulas or obscure jargon."


In Taiwan, however, Chen points out that cli-fi, and its elder brother sci-fi, have long been considered culturally deleterious. For this reason, both genres have been treated mostly by ignoring them.  "If a culture is to find its own path in the development of technology and science, it cannot rely solely on engineers," he says. "Taiwan has plenty of good engineers; they contribute to the quality of manufacturers, so our industries are strong. But this is like walking on one foot; it's unstable, and you're not going to get very far. We need another foot so we can walk steadily into the climate future; this foot has to be cultural strength. I believe we need to rely on our scientific climate imagination to shore up this footing."


So a class focussing on cli-fi novels and movies is just what Taiwan needs, Wu adds.

Indeed, it was this concern that brought professors Chen and Wu together at NU. They believe that Taiwanese are averse to the imaginative side of their culture because they prefer the safety of the well-traveled road. "If we don't risk making mistakes with imagining climate fiction, we'll always be followers," Chen says.


Chen and Wu are hoping to encourage boldness in young people, the boldness to break free from unnecessary constraints and imported influences, to make mistakes and dream their own future.

Irene Chan says the class has steered her in a new literary direction and her positivity is infectious. "The amazing thing about cli-fi novels and movies is that you imagine what might happen in the future if we do nothing to stop runaway global warming, and there's a chance that the dire warnings we hear from climate experts in North Americ and Europe may come true someday, even here in subtropical Taiwan."