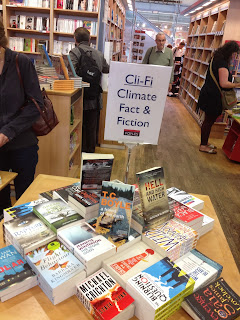 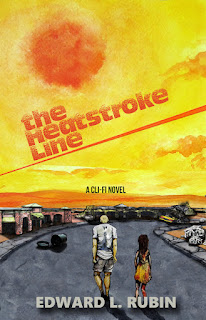 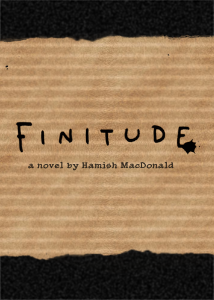 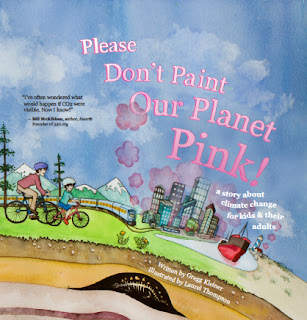 These novels below almost never make most must-read cli fi lists. but here are a few you should seek out before during and after your college career. Academics will like these books, too. In no particular order, other than TEN PLUS EIGHT (10 + 8).

MARLY, a cli-fi novella by Vermont writer Peter Gould, published in 2015. Playwright, novelist, Shakespearean scholar, director, all around literary provocateur, Gould is one of the most best writers alive. With Marly, he has again taken on an urgent subject, climate change, with brassy humor, verbal pyrotechnics, and dialogue so vivid, it’s as if a reader is standing right next to the characters as they philosophically riff, fling ideas back and forth, flirt and light up with moods and opinions. [From Green Writers Press in Vermont. Paperback.]


Polar City Red, by Jim Laughter, the first cli-fi novel ever that first set the cli-fi craze off in 2012


Finitude, by Hamish MacDonald first published in 2010 in Scotland/Canada, a cli-fi novel with a gay main character. NOTE: This novel is now FREE FOREVER on author's website!
http://www.taipeitimes.com/News/feat/archives/2010/01/10/2003463101

Det som inte växer är döende,  by Mr. Jesper Weithz in 2012 [Jesper Weithz is a cli fi novelist in Sweden. His major 2012 cli fi novel is in Swedish now and awaiting to find a publisher in UK or USA. Google his name to see his novel. A brief interview in English with him is here:]
http://northwardho.blogspot.tw/2015/12/an-interview-in-with-swedish-cli-fi.html


The Healer, by Antti Tuomainen in Finland, a ''cli-fi noir'' novel, English translation here via Amazon.com and at Goodreads below:
https://www.goodreads.com/review/show/1473958806

Aqua (TM), by French novelist Jean-Marc Ligny (in French only but some chapters translated here)
http://imagining-climate.clas.ufl.edu/jean-marc-ligny/


''Something, out there,'' ["Qualcosa, là fuori" in Italian] by Bruno Arpaia (in Italian only but English interview with author here)
http://northwardho.blogspot.tw/2015/12/an-interview-with-italian-novelist.html

Jodissea, by Federico Nanut (in Italian only, but English interview with author and book cover and Amazon link in Italy here)
http://northwardho.blogspot.tw/2015/12/federico-nanut-in-italy-has-published.html

Rapture, by Liz Jensen, an engaging tale of cli-fi disaster that could make a very good movie someday
http://www.theguardian.com/books/2009/jun/13/the-rapture-liz-jensen

Memory of Water, by Emmi Itaranta (written in Finnish, translated in English and 15 other languages worldwide, with interview with author here) and below:
http://katrossbooks.com/1/category/emmi%20itaranta7fe8fa5952/1.html

City of the Homeless, by  Annika Luther in Finland, in Finnish only, English translation possible in future years: ''De hemlösas stad '' (City of the Homeless)
from Schildts & Söderströms book company, published in 2011.
[Reviewed in English by Anna Holmwood in The Swedish Book Review]

The Ilusion of Chaos, a YA novel by Carlos Calles in Mexico, published in Spanish only as "La ilusión del caos." [The author tells this blog: ''A few lines about myself. My name is Carlos Calles, I'm from Mexico. I currently live in Monterrey, about two hours away from the US border. I'm 32, I studied English literature in Chile (Universidad Católica) and have a Masters in Humanities (Tec de Monterrey). I teach literature, both in English and in Spanish, at Prepa Tec High School. I'm also a published author: my first novel is called "El polvo que se acumula en los objetos", which roughly translates "The dust that settles on objects". My second book is a YA novel: "La ilusión del caos", which could be translated as "The illusion of chaos", and this is actually a work of Cli Fi. It is published by "edebé", a publishing house from Spain with offices in Mexico and other Latin American countries.'' ]


Back to the Garden, by Clara Hume, the pen name of a novelist living in Canada
http://pcillu101.blogspot.tw/2013/02/clara-hume-has-written-cli-fi-novel.html


In Ark, by Lisa Devaney in the UK (with a sequel in the works)
http://www.lisadevaney.com/end-of-year-high-note-for-my-in-ark-a-promise-of-survival/