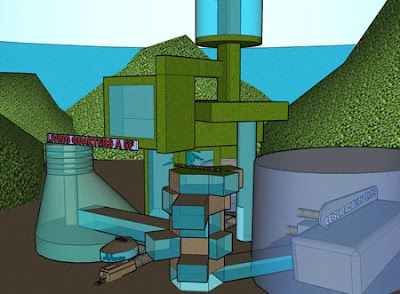 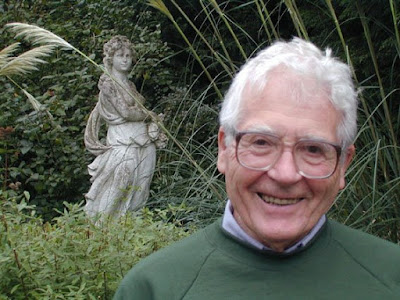 Question: How did you come to be "James Lovelock's Accidental Student"?

DANNY BLOOM: Two years ago I read Fiona Harvey's wonderful lunchtime
interview in the Financial Times in the UK with Dr Lovelock over
some good wine they were sharing in London, and in the interview, and
in other places, Lovelock talked about his vision
of the far distant future being a place in northern regions where the
only survivors left on Earth, perhaps just 200,000 people,
would be "breeding pairs in the Arctic". This hit me hard, right in
the gut and right in the center of my brain, too. I kept thinking
about those words for a few days and finally I asked myself, where
will these "breeding pairs" live, I mean, what kind of settlements
will they be housed in, and where will these settlements be located?
And also: who will govern these settlements, and who will be
allowed in, or who will get in, and will they survive the long long
Long Emergency that will be happeneing then -- an event I now call The
Great Interruption -- and so one afternoon after waking up from a nap
in my cave in Taiwan I envisioned something like "polar cities" for
these breeding pairs in Lovelock's Arctic. That's how the term polar
cities was born. And that is how I became James Lovelock's Accidental
Student. This was also around the same time as the IPCC report was
coming out in February 2007 to great media fanfare and there were
headlines every day in my local English newspaper in Taiwan, so I was
obsessing with the issues of climate change and global warming for the
first time in my life. Just two years ago. Before that, I was not
involved in this activism or visionary thinking at all.

Question: How did you find an artist to illustrate your viision of a
polar city to house Lovelock's "breeding pairs in the Arctic"?

Near my home in Taiwan, there was a small advertising agency run by a
pontailed man named Deng Cheng-hong. I rode my bicycle over to his
shop one Sunday afternoon and asked him if he could illustrate my
polar cities idea with some hand-drawn art or some computer-generated
work. He also had never really thought about global warming in a very
deep way, either, but he understand what I was talkingh about, even
though he did not speak English and I do not speak Chinese, but we
communicated and I showed him some very rough sketches I had done up
at my home in pencil and crayon on paper. He took these sketches and 8
weeks later came back with these wonderful, color illustrastions of
his artistic view of what a polar city blueprint might look like. I
knew this was it. He had given life to my vision, which I gotten from
Dr Lovelock's interviews and books and speeches. Dr Lovelock is my
mentor in all this.

When I showed Mr Deng's images to reporters in the USA -- and to Dr
Lovelock himself in the UK by email -- the response was very positive.
The New York Times blog Dot Earth, written by veteran science reporter
Andrew C. Revkin, wrote about polar cities, with Deng's images printed
on the blog as well, on March 29, 2008. The response was immediate,
both pro and con. I have not stopped promoting polar cities since that
day. The New York Times gave me the greenlight and I decided to spend
the rest of my life promoting and talking about, both pro and con,
polar cities. But this was not part of my life plan before 2006. I am
a writer, an editor, a poet, a dreamer. But after I read Lovelock's
words about "breeding pairs in the Arctic" I became haunted, obsessed,
with those words. And here I am, age 60, James Lovelock's Accidental
Student. I have no PHD, no academic sponors, no credibility at all. I
am nobody. I am nothing. AndI love this work. This is my life's work
now. A few more years here on Planet Earth and then I'm gone. I care
about the future. Deeply. I care about what life will be like on Earth
30 generations down the road, in 2500 or so. Polar cities might save
us from extinction.

QUESTION: Have you ever met or spoken with Dr Lovelock?

BLOOM: Never. But I did email his office one time, and showed him
Deng's images and my website about polar cities for his breeding pairs
in the Arctic to live in and he replied: "Thanks, Danny, for showing
me those images. It may very well happen, and soon!"

QUESTON: What's next for you?

BLOOM: More of the same. Promoting the concept of polar cities, what I
also call climate retreats for climate refugees, for the rest of my
life. These polar cities will be not be at the poles per se. They will
be in northern and southern regions of the world, from Tasmania and
New Zealand and Patagonia and Antarctica in the southern hemisphere to
Alaska and Canada and Russia and Greenland and Iceland and Norway in
the north. These polar cities are where Lovelock's breeding pairs will
live. We need to think hard about who will get in, who will govern
them, who will administer them, and what life inside will be like.
That's my brief.

QUESTION: Who gave you this brief?

BLOOM: Lovelock gave it to me. He does not know it, but he gave it to
me. I am just following in his footsteps. Using my visionary skills
and out-of-the-box thinking and global PR skills to create an important
discussion, both pro and con, online, in print and in classrooms, too. Who gave me this brief? I gave it to
myself. I am James Lovelock's Accidental Student. It's energizing. I enjoy this work.
It's my 24/7 obsession, but a healthy, productive, creative obsession. Thank you, James Lovelock! But all this is not something that makes me happy, and it's not a pretty picture. We are talking about some very dark times coming down the road in 30 generations or so. I don't get enjoyment out of this work. But I do get a sense of doing something positive and important. And I remain an optimist, despite what it might seem. I am an eternal optimist. That is why I envisioned polar cities to save humanity from extinction in some future time when global warming's major impact events have reduced the human tribe to just 200,000 men, women and children barely surviving -- but surviving, yes! -- in polar cities scattered around the world. The Earth's populations of humans will have dropped by then from 25 billion to just 200,000 souls. I am ready to talk about this. Who wants to join me in this important scientific and spiritual discussion? I think there are lots of people who understand exactly what I am saying, and thanks to Dr Lovelock, am trying to promote as an important idea for the future.

A news reporter in Europe tells me today:

I appreciate the originality of your idea of polar cities, and your enthusiasm, and
your independence. I really do. But unless you are a scientist or
engineer, or your idea has gotten some serious traction somewhere, I
cannot justify doing a separate piece on you and your work. But I have
made a note of your website and your work, and if the opportunity
arises for me to allude to them, I will get back in touch. Honestly.


Interesting coincidence: I spent an hour in conversation with Dr.
Lovelock yesterday."

Hi Danny. Thanks for finding my blog and commenting. This is very interesting and I will return when I have more time!
Click here for Bazza’s Blog ‘To Discover Ice’