DeSmogBlog posts on "Virtual Graduation Speech to Class of 2099" 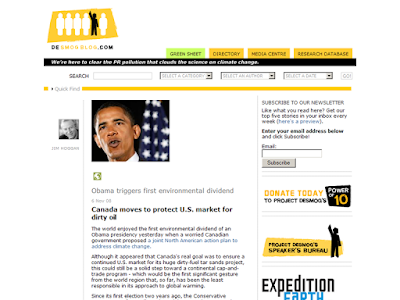 A Global Warning Graduation Speech for the Class of 2099

Posted at Desmogblog.com by Kevin Grandia

Here's a virtual speech by blogger Dan Bloom addressing Tuft University's (his alma mater, 1971) graduating "class of 2099". Interesting piece on what he sees as the future at the end of the next century.

I can't be here in person to address you, since I passed into oblivion long ago. But as a member of the graduating class of 1971 at my own beloved alma mater in Boston, I wanted to leave you with a brief message -- from the past to the future -- about global warming and
climate change.

As the class of 2099, you are about to enter the 22nd Century in a few more months, and you will bring with you not only your university experience but also your career expectations and personal anxieties as citizens living on a planet in the midst of a climate crisis. I'm sure you've heard this term a lot in the past four years -- "climate crisis" -- but you should know that in my days as a student, we never used the phrase. Back then, we had not even heard of the term yet!

Back then, of course, we were focused on terms such as Cold War, nuclear winter, war on poverty, racism, the oil shock, the Middle East situation, and later on, towards of our "three score and ten" on Earth, newer terms such as 911, terrorism and global warming.

I'm not around now, but I hope you can read my message online and perhaps view it on a digital recording in a public library. Before I continue, I just want to take a few moments here to wish you all the best of luck in your future life and the best of health to enjoy the luck that I am wishing for you. May all your dreams come true, and then some!

Members of the Class of 2099, you are living in a very crucial time in the history of humankind. Your world stands at the threshold of a period of human history when very important decisions will have to be made about the use of fossil fuels and the "consume! slash! burn!" lifestyle that you have come to expect.

I wonder: do the names James Lovelock or James Hansen or Al Gore still ring a bell in your generation now, or have new faces and names replaced these far-seeing men? Is that book by Mark Lynas, titled "Six Degrees", still in print, or has a new besteller on climate change become the must-read of your generation? Is that documentary from 2006, "An Inconvenient Truth", still in circulation? And what about Leonardo DiCaprio's "The 11th Hour"? Have you ever heard of the movie, or has it been all but forgotten in your day and age?

By the way, have you men and women of the Class of 2099 heard by now about such global warming adaptation strategies as "sustainable population retreats" in northern regions, once referred to as "polar
cities"? The terms were coined back in 2006 and some people blogge them for a couple of years before mainstream scientists and engineers went even deeper into the concepts involved.

Class of 2099, I want to leave you with seven words: "We must tighten
the noose around coal".


Dr. Jesse Ausubel of Rockefeller University in the U.S. wrote those words more than 100 years ago, and they were prophetic. Has your world tightened the noose around coal? Has your world started to tackle the vexing problems of overpopulation, climate change and the creation of a sustainable economy? Is global warming something that will shape your future, or are the denialists out there still complaining that it
is a hoax?

Whatever your own personal views are about global warming, pro or con, or just sitting on the fence in the middle of the debate, you should know this: there is not much time left. I hope your generation finds a way to stop the burning of fossil fuels and also finds ways to mitigate the impact of climate change on your future world. I just said that "there is not much time left". Maybe I should have said "time is running out". Or maybe I should have said: "Time has run out."

Whatever. Class of 2099, go out and help create your world. Good luck
and God bless!

1. We will know by 2030 whether this boat heads in the right direction or not. If no one is decreasing fossil fuels by then, its an automatic ride with the tipping points gaining momentum.

2. Danny: That's an excellent commencement speech -- better than almost all the ones i've ever heard -- [B.] [B. is a well-known environmentalist and climate activist, author and speaker]

3. When asked what comment or message he would like to give to students graduating today, 2009 or in future years, 2010, 2011 and 2012, etc, Dr Jesse Ausubel, quoted in the speech above, in a very central part of the speech, told this blogger: "My message is this: 'The Earth should stop smoking' just as individuals
should stop smoking tobacco. All this combustion of carbon is
bad for planetary health of our planet Earth."

4. A noted climate research and climate modeller, tops in his field, based in California at Standford, told me in a private email: "Danny, you asked for my reaction to that imaginary speech? Prophetic, I fear...."
Posted by DANIELBLOOM at 8:31 PM

A Virtual Graduation Speech for the 6th Grade Graduates of Converse
Street Elementary School "Class of 2099" in 2099 A..D.

I can't be here in person to address you, since I passed into oblivion
long ago. But I once went to Converse Street Elementary School here in
Longmeadow when I was a young boy living just down the street from
here. I want to leave you with a brief message -- from the past to the
future -- about global warming and climate change, and even though you
are only ten years old, there are still many things you can do about
these issues. I am sure your teachers are giving you good ideas and
even better advice, since the future of our planet hangs in the
balance.

As the Converse Street Elementary School class of 2099, you will be
going on to middle school in just a few more months, and there and
later on at Longmeadow High School you will study more about the
climate and how humans must work hard to make things better here on
Earth.

I recently came accross your blog and have been reading along. I thought I would leave my first comment. I dont know what to say except that I have enjoyed reading. Nice blog. I will keep visiting this blog very often.