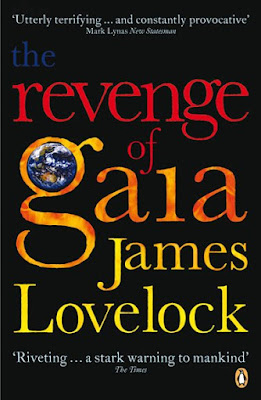 
JAMES Lovelock is a scientist known for his "Gaia Hypothesis," after the Greek goddess of the Earth.

In this hypothesis, Lovelock states that the entire mass of living and nonliving matter on Earth functions together in a complex, interdependent system that can be viewed as a "living entity."

The Gaia, our Earth, is very ill, and is becoming even sicker due to global warming.

Lovelock's "The Revenge of Gaia: Why the Earth Is Fighting Back -- and How We Can Still Save Humanity" concludes that HUmankind has passed the point at which it is possible to reverse the dangerous effects of global warming.

"If we fail to take care of the Earth, it surely will take care of itself by making us no longer welcome," the book warns.

This view of interdependence is a drastic departure from prevailing perception, implied or otherwise, of humans as conquerors of the nature.

He believed that since humans are born of nature, live in it, and will return to it, "I" is part of nature. Just as you do not give more weight to one bodily function over others, the stress of pitting oneself against nature is ridiculous.

The sage thus laments the man who (in Burton Watson's translation) is "sometimes clashing with things, sometimes bending before them. He runs his course like a galloping steed, and nothing can stop him."

"Sweating and laboring to the end of his days and never seeing his accomplishment, utterly exhausting himself and never knowing where to look for rest -- can you help pitying him?" Chuang Tzu wonders.

Much of human strife conjures up an image of an Antaeus (titan) trying hard to cut his nexus with mother Earth.

Chuang Tzu's vision of human beings as part of nature has important implications for Chinese.

For instance, it explains why traditional Chinese dwellings emphasize oneness with nature, and the modern "comfort" of living confined to an stuffy, air-conditioned highrise or a moving metal box -- all the while poisoning the air -- is incomprehensible.
This insight into human nature ensures that the Earth's relatively simple homeostatic mechanisms work, since "The Earth System behaves as a single, self-regulating system comprised of physical, chemical, biological and human components," a consensus reached by scientists at a climate-change conference in 2001.

Lovelock makes it clear that Gaia's ability to self-regulate is at risk.

"The humanist concept of sustainable development and the Christian concept of stewardship are flawed by unconscious hubris," Lovelace claims.

If we conceive of this life like that of a sparrow that flies into the warmth and light of the feasting hall from the darkness and storms outside, and then flies out again into darkness through the opposite door, we have little incentives not to make the most of our brief stay in the feasting hall.

Although Chinese society is partly characterized by the absence of institutionalized religion, this has always been balanced by our strong bond to our posterity, and this empowered view of our life as an endless stream infinitely enhances our awareness of our responsibilities.

In his diary for December 16, 1923, scholar Hu Shih recorded an exchange with one of the most revered contemporary classical scholars Wang Guowei, who believed that Western preoccupation with desires would in time lead to destruction and catastrophe.

Hu Shih, while less pessimistic, claims that "we have no choice but to head to this direction too."

Lovelock warns that a dangerous state of "Positive Feedback" can have disastrous consequences.

In positive feedback, the response is to amplify the change in the variable. This has a de-stabilizing effect.

Among such instances are the "ice albedo feedback," in which the melting of snow-covered ground would accelerate the earth's warming.

"The planet we live on has merely to shrug to take some fraction of a million people to their deaths," Lovelace warns.

Yet Lovelock's capacity as a scientist also dramatically limits his vision.

He still takes comfort in technological fixes, in his belief that "only nuclear power can now halt global warming."

He also proposes that nations should begin planning to synthesize food from available materials.
Posted by DANIELBLOOM at 9:49 PM