The Age of Stupid: Polar Cities and More! 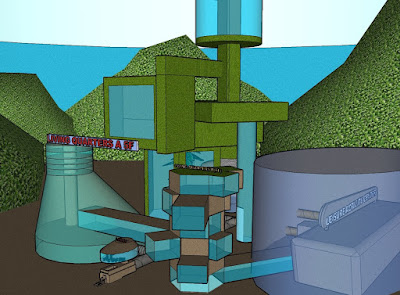 London is underwater, New Orleans won’t be rebuilt a third time, the
arctic is ice free, people are living in polar cities, and agriculture is failing, which leads to global
food riots and ultimately the collapse of civilization…. This is the
premise of the British independent film The Age of
Stupid.

Set in 2500 AD, the film portrays a post-apocalyptic world ravaged by the
worst impacts of climate change, and looks back at the critical period
between 2005 and 2015 to examine why we didn’t save ourselves when we
still had the chance.

In an opening sequence, the narrator (played by Oscar nominee Pete
Postlethwaite) takes us through a montage of news reports describing
visible impacts of climate change: A 101 degree day in London, 700
dead after record flooding in India, record breaking drought in
Melbourne, desertification in China progressing at the rate of 3 miles
per year, dozens of Antarctic ice shelves collapsing faster than
anyone predicted, 18 million affected by flooding in parts of Africa,
and a glacier in France having shrunk 150 meters since 1945.

The fact that the clips in this montage are all real-life news reports
from 2007 and 2008 is chilling.

Indeed, although framed by a post-apocalyptic narrative set in the
future, the bulk of the film is actually a documentary about the
impacts of climate change that we are already seeing in 2009 — and its
not pretty.

That the impacts are depicted through the lens of real human stories
makes the film’s message all the more accessible and compelling. Here
is a snapshot of some of the characters and their stories:

Alvin DuVernay is a career oil paleontologist from New Orleans who
spent his life directing drill bits for Shell. When Hurricane Katrina
hit in 2005, he personally rescued 100 people in his boat, but lost
his home and all his possessions.

I lost everything. Everything that I owned. Quite literally. Except
for my boat. I mean everything from family heirlooms to the paper
towels sitting on your kitchen counter. And everything in between. It
goes on and on.

I mean what more of a wake up call do you need? At the very local
level all the way through and including the top federal level I just
don’t see that awakening, that epiphany in the politicians’ eyes. I
don’t see the sense of urgency. And I certainly don’t see movement. A
year or so later, after the event, and not a whole lot has changed.

Then there is the 80-year old French Alps mountain guide who, over the
course of his 45-year career has seen the glacier that he loves shrink
by 150 meters:

When I first saw all these mountains. The beauty. It was wonderful. It
was truly love at first sight.

And then there is the wind farm developer whose noble attempts to get
a few wind turbines installed in a rural part of England are rebuffed
by selfish grassroots resistance (the whirling of the blades might
hypnotize people while they are driving….)

The fact that you can’t go skiing anymore or that the glaciers are
melting is not really the point. The point is that’s a signal that
basically the earth is destabilising and all the norms that have
allowed life to exist as it has done are changing.

If we don’t face up to our fears, I just feel we’re abusing it, our
environment which gives us so much. We’re just rampantly,
disrespectfully trashing it.

The film traces these real human stories to convey the impacts of
climate change on a personal level, and is at times funny, scary and
tender. What’s amazing is that all of the material is real.

The fictional aspect of the film serves only as a narrative device
until the very end, when a final sequence of news reports takes us
from the year 2007 to 2055: 80,000 fatalities from a giant cyclone in
Asia, water rationing in Holland, forest fires sweep across Spain, the
decision is made not to rebuild New Orleans for a 3rd time, a drinking
water crisis erupts in Pakistan, heat waves strike San Francisco, 35
million Chinese become climate refugees, skiing in the alps is over,
100 million are homeless in Bangladesh due to massive flooding, the
European Union permanently closes its borders, the last Indonesian
tree falls to make way for palm oil production, a 30-foot swell
overcomes the Thames and floods London, New Zealand closes its borders
to Australian refugees, 100 million refugees flee the middle east,
half of all species become extinct, ecosystems collapse across the
planet, the north sea boils, food riots become so severe that people
begin to eat their own cats and dogs, nuclear war breaks out.

The stated goal of The Age of Stupid is to “turn 250 million viewers
into climate activists,” and it makes the case that we have to
stabilize and begin to reduce global emissions by 2015 to avoid the
catastrophic consequences it speculates about above.

Even if a bit over-the-top (come on, the North Sea boiling?) this
hard-hitting final sequence is nonetheless powerful, and left me
watching the credits role with a sense of urgency that even as a
long-time climate activist I had not experienced before.

We wouldn’t be the first life form to wipe itself out. But what would
be unique about us is that we did it knowingly. What does that say
about us?

The question I’ve been asking is: why didn’t we save ourselves when we
had the chance? Is the answer because on some level we weren’t sure if
we were worth saving?

The Age of Stupid is set to premiere in US theatres next month.
Posted by DANIELBLOOM at 9:13 PM