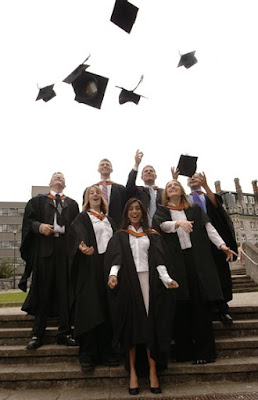 The raison d'etre behind "a virtual graduation speech to the class of 2099" about climate change and global warming:

The "speech" was shot in a studio on the campus of a local university in southern Taiwan, with junior communications department student Aremac Chuang, who hopes someday to work as a film director or producer (spell his first name backwards to see why he chose that name for his English name) on a Monday afternoon and put up on YouTube the same night. All by Mr Chuang, who volunteered to help us with the project. I had only met him one day before. We shot the video in one take, his camera, his campus studio, a kind of blue room they call it, and the 4.5 minute process took all of 5 minutes to do.

As the video now up on YouTube gets more and more hits as the days and months go on, I want to say this: [comments by "graduation speaker" Danny Bloom]

"Since the speech is for the class of 2099 at universities around the world in May and June of the year 2099 A.D.....I hope the video will stay up on YouTube and other video-sharing websites for another 90 years, perhaps even more. Of course, I won't be around much past another ten years or so to see the new comments that come in or to see how many hits the speech gets on YouTube, but I am hoping for 10,000 in the next 12 months and maybe 25,000 hits by 2012."

"May the blogforce be with it!"