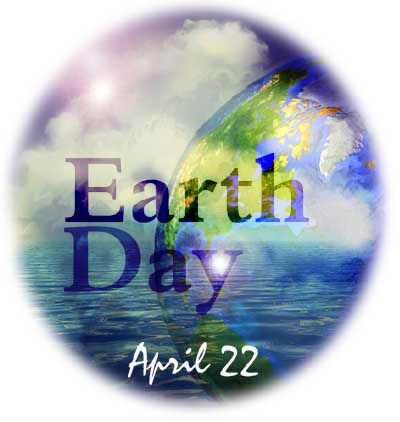 [Here are some Earth Day reflections by Dr Steven Moffic, a psychiatrist and author in Wisconsin. Very concerned about climate change and global warming, as a citizen living today and as the grandfather of three grandchildren, Dr Moffic wrote this commentary in early April for publication worldwide even before Earth Day later in the month, for reasons that you will soon see.]

MILWAUKEE, WISCONSIN -- It’s April 1, 2009, aka April Fools Day in the USA, my favorite holiday. I’m wondering what kind of foolishness I’ll encounter, especially about a psychiatric problem dear to my heart, the foolishness of global warming.

In Milwaukee, where I live, it is overcast with a few snowflakes and is supposed to go up to 50 degrees (F) with strong winds. Well, nothing foolish about the April weather here. I looked in the Financial Times to see if there was any foolishness in the global weather: Taipei, 63 and fair; Moscow, 45 and drizzle; Delhi, 93 and sunny; London, 61 and fair. So, most everything around the world weather-wise is not too scary, except for one place.

But, of course, the daily weather generally has little to do with climate change, though it is tempting to pair them. Climate had to do with long-term patterns, whereas the weather is more immediate. However, even with daily weather, the weatherman isn’t always accurate enough with daily predictions. That makes lots of people wonder how in the world we can predict what climate change will influence the weather in 50 years. This has important psychological implications. If you don’t trust in the accuracy of everyday weather predictions that you can see and feel, it is hard to trust the consensus of climatologists, even though the issues are different.

Unfortunately, the weather exception today is by Fargo, North Dakota, where the rising Red River has caused severe damage. Today, a new blizzard is due. The Red River flooding has been a tragedy in more than one way and can be illustrative of the dangers of climate change. The flooding risks in that area have been known for a long time but, like hurricane Katrina in New Orleans, were never adequately addressed in order to prevent severe damage. It was felt by the powers-to-be that the immediate costs were too high for what was felt to be a rare distant risk, so only makeshift changes were made years ago. One small, but relevant, irony in the current crisis is that some businesses have benefitted from the damage, like Mac’s Hardware.

The only other kind of foolishness I could find in the morning news was about the G20 summit. The weather in London was great, so the protestors, which included climate activists, would not be “rained out” by the typical (at least before global warming) London rain. The climate activists seem to feel there was a connection of climate change with the recent failures of the capitalistic economy, calling their protest “Financial Fools Day”. Some rioting and damage to banks ensued.

Finishing the news, I set off with my wife for some annual foolishness. This time we made a surprise visit to our grandchildren, who were the inspiration for my epiphany about global warming and the risks to their generation.

Then the sun came out and we were on the way to hear Al Gore speak in Chicago. After seeing outside some foolish protestors about global warming being a hoax and 9/11 being “an inside job”, we went inside to a packed auditorium. This was not Gore’s new slide show, but a brief presentation by him, followed by interview questions, which seemed to allow more spontaneity.

Gore’s new point was to connect the need to address climate change with how to make an economic recovery, and also make the world more secure. Oil was at the center of his argument. He felt that emerging innovation regarding solar power and then setting up a new jobs corps to install that technology worldwide would, as the saying goes, “kill 2 birds with 1 stone”. Less reliance on oil could then change the expensive conflicts in the Middle East.

Psychologically speaking, I thought this message was very insightful, though I don’t know if its psychological implications were intended. One of the biggest obstacles to being concerned about global warming is that we humans are hard-wired to respond to immediate danger with a fight or flight response, but we have no corresponding natural brain mechanism for distant danger. Makes sense for cavemen, but maybe not for us with all our technological advances which sometimes have unintended bad consequences. This limitation allows us to easily deny future problems, consciously or unconsciously, and turn to other priorities.

Connecting the more distant risks of global warming with the immediate economic needs can make the former problem of more concern to more people and politicians. Gore also seems to realize the psychological importance of giving people awards if they are to overcome their fear of change. New renewable energy and cheap enough costs could do just that.

Of course, there are other important psychological issues Gore did not touch upon. One is the names we use for these problems. “Global Warming” is far too benign sounding and some geographical areas may even benefit, just like certain businesses are in North Dakota. “Climate Change” sounds either good or bad. I would suggest something like “global boiling” and “climate instability” instead.

He didn’t talk about the cognitive dissonance from the combination of the benefits of fossil fuel industry being coupled with the harm. This is almost like some of the psychological fusion you can get of pleasure and pain with child sexual abuse, which was one of the reasons it is often not reported.

He didn’t talk about making interim mitigating plans, such as the polar cities suggested by Danny Bloom. Danny has also stuck upon an innovative way to make the distant risk more immediate by making a graduation speech to the “Class of 2099”.

I also wish he might have criticized those extreme climate activists in London, since it is now clear hat such violence will backfire in the case of climate change. Just read Michael Crichton’s novel “A State of Fear” to see how extreme this strategy could unfortunately be taken someday. Unlike the nuclear war threat, which is more immediate and clear, threats will just push people more away from this climate problem.

Gore also didn’t mention how good “going green” can be for your mental health. Maybe that’s one of the reasons he looks so good nowadays. We know there is a “helpers’ high” that comes from making the world a better place and leaving a good legacy. Madoff won’t get that now.

Also, don’t forget about the benefits of subliminal persuasion. Dress in bright green and you might get a reaction to which you can respond: “I’m going green to help reduce global warming!”

We should all not forget that Gore was right in his prediction of the importance of the Internet. I suspect he has also been right about global warming. Enough of this climate foolishness! Maybe we should expand Earth Day to the Earth Month of April, starting with April Fools Day as an annual reminder for us to not be climately foolish.
Posted by DANIELBLOOM at 7:29 PM

Nice story you got here. I'd like to read a bit more about this matter. Thnx for sharing this material.
The only thing I would like to see here is such photo of sexy girl :)
Sexy Lady
Busty Escort London