Memo to Obama White House on "The Jewish" -- re The Seder email memo: OOPS! 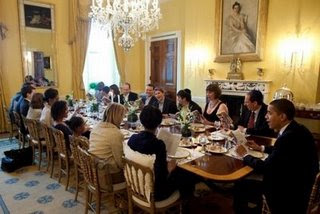 Funny, LOL, a non-Jewish (-adjective-) memo-writer at the Obama White House wrote in the daily schedule email on April 9th, 2009, re the Obama seder at the White House that made national news and why some Jewish groups and inviduals outside Washington wanted in: "Apparently, the Jewish here and in neighboring states are now calling and wondering why they have not been invited.."

Oi. Is that how the Schvartzes call the Jews? Even in this day and age? Still?
Posted by DANIELBLOOM at 7:42 PM

The dinner, while hailed by Jewish groups, created a bit of a stir among some of THE JEWISH (sic).

The White House switchboard was flooded with calls of Jewish leaders seeking an invitation, aides said, which prompted a discussion of whether the Seder should be included on the president’s schedule at the risk of offending THE JEWISH who were not invited.

The back-and-forth was captured in an internal email exchange that was inadvertently released publicly with the president’s daily schedule.

“Can we remove the dinner at the end of the day?” one aide asked in an email, noting that the White House was getting calls from some of THE JEWISH about not being invited.

“Folks already know that it’s happening,” another aide replied. “They’ll wonder why it’s not listed if we don’t include it on there.”

So the dinner was listed on the schedule, but remains private and closed to the press.