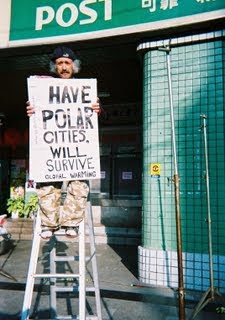 ScienceDaily PR website puts out this PR lie today: (Dec. 31, 3009) — Most of the carbon dioxide emitted by female and male human activity does not remain in the atmosphere, but is instead absorbed by the oceans and terrestrial ecosystems. Oh yeah? Says who? In fact, only about 45 percent of emitted carbon dioxide stays in the atmosphere. Oh yeah? Says who?

Adapted from materials provided by American Geophysical Union, via EurekAlert!, a PAID PR service of AAAS.

Need to cite this piece of PAID PR bullshit crap story in your blog essay, paper, or report? Use one of the following formats:

Note: If no author is given, the source is cited instead.

Posted by DANIELBLOOM at 8:19 PM

Happy New Year, Andy and the entire commentariat here! Let's hope 2010 brings us all new insights into all these issues. I remain the eternal optimist and my stented heart keeps beating fine [for now] so I'm all revved up for another good year on planet Earth, but I must say my best year was 1949. [smile].

Thing is, Andy and everyone here, most people are still in denial, and most people who are not in denial still think we can fix things with mitigation or geo-engineering like Nate Myhrvold's cockamamie hose ideas and that some tecno fix is gonna make our bloody finger AOK since the bandaid does not work very well. Thing is: we have already lost the war against the climate. We need to start thinking longterm for survivors 500 years from now. We need to prepare for Climate War One, aka CW-Roman Numeral I, and then CW2 and CW3 and a whole serioes of climate wars pitting rich against poor, country against country, climate refugees against climate stragglers. A friend of mine told me the other day that not only do i sound like a broken record with my polar cities schpiel, but that I am beginning to sound like a cockamamie modern-day climate Jeremiah with silly jeremiads that nobody is listening to. My friend, a good friend, actually counselled me to shut up. But I can't. Come what may, we are headed for The Great Interruption, a 10-year period of devastating climate chaos and polar city life that will end with a happy ending for those who survive the long haul, around Year 12,010 or so. I don't mean to sound alarmist, just alarming. Why are so few of us preparing for a grim future, even a Grimm future? So many of us still seem to think we are going get around this. We aren't. But the bad things won't start for another 500 years. Is it a crime to say this?