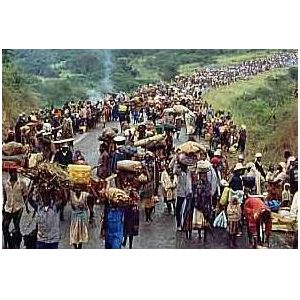 The human face of climate change

The HUMAN FACE of climate change and "climate refugees"

In an email interview in late December 2009 with Michael Nash, this blog asked him if
in the future.....if there will be more and more "climate refugees" fleeing Third World countries... where will they go and who will pay for their resettlement and how will they cope with their new
surroundings?

Nash replied: "The first movement of climate refugees will be to neighboring countries which in most cases are all ready struggling with their own issues. Add millions of new mouths to feed, and it won't be long before that country starts to see conflict. People with no resources, food and water, will go to countries with resources."


When asked what motivated or inspired him to make this important documentary, and who he hoped to reach with its message, Nash said: "This issue has become so polarized that I really wanted to travel around the world and find out if our Earth is really changing, and if so, was there a human face to it. So I talked to farmers and fishermen, scientists, politicians and scholars from all corners of our planet asking them what they have witnessed. This film really is a global film, it's for the citizens of Mother Earth."


When asked a personal question, was he pessimistic or optimistic about the future of our world,
and especially the future prospects for the human species in regard to climate change -- and if he thought humans would still be around in the year 2500? -- Nash replied: "I have faith in humankind. The year 2500, of course, is a long time out, and we have very large issues with the next 50 years that we need to address before thinking about 2500. The good news is, I believe we have the technology to solve most of our problems."

When asked if he felt that climate refugees from many countries might one day flood into northern places like Alaska and Canada and Russia in next 100 to
500 years, if things get bad, and if he think the scenario might be a kind of "MAD MAX" meets "THE ROAD" apocalyptic scenario imagined so far mostly by Hollywood screenwriters, Nash said he had a less extreme take on this but that he was also very concerned about the issues (and this his documentary). He told this blog: "There are currently 25 to 30 million climate refugees or as the UN calls them, "environmentally-induced migrants". The numbers grow quickly with a degree or two change in temperatures. Experts have the numbers at 150 million to as high as 1 billion by the year 2050. In the second phase of migration, people will move to places like North America and Europe. They are going to cross borders seeking food and water, which will in turn create conflicts. I think your reference to the Mel Gibson movie "Mad Max" is a bit extreme, but certainly we are going to live in a different world in the future if we don't control take care of these problems."

SOME PUBLIC REACTIONS of screenings of the film so far:

In a review of the movie in November, Stacy Lynne wrote that she saw the movie at a screening at Colorado State University, with a sold-out crowd in attendance.

Lynne noted in her introduction that the film was chosen to be featured at the United Nations Framework Convention on Climate Change in Copenhagen in December.

She wrote: "Prior to the screening, Michael Nash explained to the audience that we need to get past the debate on global warming and climate change because it does not matter. He said “this is not a spectator sport”. He [said that when he googled the title of his movie in a search engine the first time, searching for term "climate refugees," he did not get even a single hit the first time he looked, and this meant that the term is so new, people are not aware of it, And there, it is a very important and needed term, that also needs to be popularized....]

She added: "'Climate Refugees' features emotional, gut-wrenching stories of people from Third World countries who experienced devastating losses from weather-related events. Remember, there is a significant difference between weather and climate. The people featured in 'Climate Refugees' were exploited during their most vulnerable time. They had lost their homes -- and sometimes their loved ones."

She also noted: "Nash claims that Bangladesh is the ground zero of climate change because of its proximity to the ocean along its coastline. A 10 year old boy from Bangladesh says in the movie: “Bangladesh won’t survive unless America saves it.”

The country of Tuvalu, which is a mere strip of land in the middle of the Pacific Ocean will be the “first country to go” due to “rising sea levels”.

One of the people interviwed by Nash in the documentary, Peter Schwartz, says on camera, “It’s all about water. Too much and too little.”

Lynne notes that some points made in the film include:

1. We need a new international framework of law.
2. We are entering a period of consequences.
3. Only 100 months left before it is all over!
4. China is rampantly over-farming.
5. We will have “environmental ghost towns.”
6. People shouldn’t have to be enslaved because of climate change.
7. Overpopulation, overconsumption, lack of resources and changing climate are the main reasons for the climate refugees.
8. Lester Brown says this is no longer about saving the planet. This is about how to save civilization.

Lynne also notes that the solutions proposed in "Climate Refugees" are: