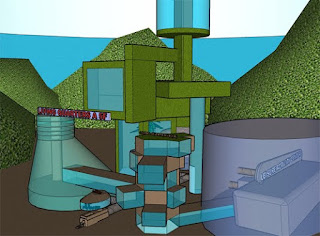 Danny Bloom's global warming solution scheme of building hundreds of polar cities in the far north (Alaska!) and far south (New Zealand!) is intriguing, even for those people (increasingly most people) who doubt that man caused global warming is actually real.

The 1971 Tufts grad also blogs daily on his controversial polar city ideas at "northwardho" in the blogosphere.

Bloom thinks that he has found a way out, a solution, for global warming, which which he says cannot be stopped. Global warming, that is. He says it's all over for the human species, although of course we all know it's not over till the skinny black dude sings. But Bloom insists some people will survive devastating global warming impact events in the year 2500 by taking refuge in some 144 polar cities administered and funded by the United Nations.

"Ten billion will die in a massive human die-off," Bloom predicts on his blog, adding: "But perhaps one million people will survive, black, white and brown, men and women and children, and maybe as few as just 200,000, and these survivors in polar cities will serve as breeding pairs to ensure that the human race does not die out completely."

Bloom says he got the idea for polar cities from Britiish chemist James Lovelock, who wrote about "breeding pairs in the Arctic" in several academic papers. Bloom, who does not hold a Ph.D. and is an English teacher in Taiwan, admits he has no scientific background or academic sponsors. He says expexts lots of criticism of his idea, but is devoting the rest of his life to pushing his vision uphill, despite the odds of anyone ever taking him seriously.

The global warming "fix" proposed by Bloom involves
building 144 polar citiers in the far north and far south, capable of housing climate refugess for at least 1000 years. The estimated cost for -pre-building such future cities would be about US$500 million dollars.

Bloom's polar cities scheme is intriguing, even for those people (increasingly most people) who doubt that man caused global warming is actually real. The "Climategate" scandal involving leaked emails suggests that the data that supports the idea of man caused global warming has been doctored to some extent. Thus there is increasing resistance to the idea of arbitrarily cutting back on carbon emissions before clean energy technology is mature enough to take the place of fossil fuels, thus causing wrenching disruptions in economic growth and personal lifestyles, and even more resistance to pre-building any polar cities in Alaska or Canada, as insurance against runaway global warming.

One might suggest that Bloom's polar cities scheme might be part of more rational solution to climate change, if indeed it is a problem at all. However, most critics of Bloom's scheme have dismissed him as a lunatic or a fool, sometimes both!
Posted by DANIELBLOOM at 7:00 PM

Ice age ended by cavemen lighting campfires. This has been scientifically proven
and all other theories debunked by Al Gore a.k.a. Bullwinkle