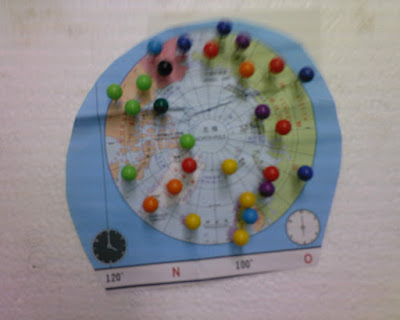 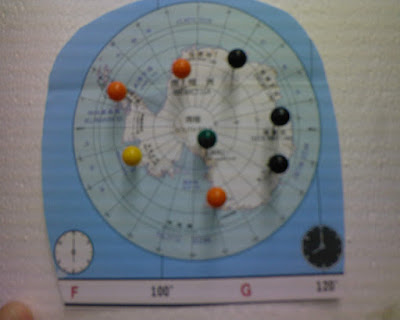 Above are two provisional and purely speculative "polar city" maps with colored pins marking possible future polar cities in the extreme northern and southern areas of the world, circa year 2500 AD. It is predicted by some scientists that 500 years from now, a combination of peak oil, overpopulation and global warming "events" will cause mass migrations north from Africa, South America, the Lower 48 and Mexico, Europe and Asia -- and those who survive those trying times in 2500 or so will be housed in some 100 polar cities scattered across Alaska, Canada, Greenland, Iceland, Russia, Norway, Finland, Sweden, southern Chile, Tasmania, New Zealand and Antarctica.

So the two maps above show, in digital photos taken with a cellphone camera on a rainy day in Taiwan, what the two polar regions might look like, in terms of where these so-called polar cities will be sited.

Please note: These locations are merely speculative sitings, and not actual polar city developments. Not yet, at any rate. Maybe the CIA and the UN and the IPCC and some wealthy Russian mega-millionaires are already buying up land and preparing the land, who knows? We have heard rumours of such things, but they seem to be mostly rumours.

Is this a picture of the future, the far distant future, when the world is in the midst of The Great Interruption (2500 - 3500), when the remnants of humankind who did not die in massive die-offs find refuge in sustainable, survivable polar cities?
Much more has to be said about these probabilities, and hopefully think tanks of the future will tackle these issues head-on. I don't have answers. I just have some questions, and a vision. Let's hope it never comes to this.

But if it does, will humankind be prepared? 500 years from now? And should we start preparing, just a little bit, even now? And not only physically, in terms of designing and prebuilding and siting these polar cities, but also mentally and spiritually preparing future generations for what "might" happen to our descendants -- so that they can survive the Great Interruption, continue breeding in these polar cities and come back down again to repopulate the Earth when it is time?

The qualities you need to excel at telling stories


I think about that question a lot. I was teaching at an inner school in Philadelphia; it was a charity thing, an English class for kids, and I sat them down and I told them I have a mystery for you.


I am probably the highest paid writer in the world, and I wasn't even the smartest kid in my class, and I am not the strongest writer, and I had no connections anywhere in cinema, so how do you explain that? Other than luck, put luck aside for a second, so what's going on?


Some of the kids had interesting answers like determination, belief system, all that stuff for sure. I have an answer -- I am more me than they are them. The point is, all your strengths and all your limitations, they are all part of who you are, and you should not try to be anything else. When a person speaks without self consciousness about who they are, it shines right through, it pops like a light. You are not trying to be funnier than you can be or cooler than you actually are, you are trying to be yourself, and when you do that, you erupt.

ShockTillYouDrop.com: There's definitely apocalypse in the air right now. Global warming is such a prevalent danger and there are movies like "I Am Legend" and "The Mist" and "The Road." You wrote this movie some time ago, so was that something hanging over you that you've wanted to get out for a long time?
M. Night Shyamalan: It's interesting ‘cause yeah, when I visited Will (Smith) when he was in New York shooting, I was like "What are you making?" and he described what he was making, and I was like "Oh my God!" (laughs) "Wow, that's weird!" And he's like, "Why? What are you making?" and I'm like "Kind of an interesting kind of movie, similar in a way." It makes sense to me, because it comes out of the times. We're all worried about things and unsure about our world. You start going to these catastrophe places in our heads. In better times, you probably won't see a lot of them; maybe there'll be a lot more broad comedies, I don't know. (laughs)

Shock: With all the paranoia in the air, can this movie still be seen as escapism?
Shyamalan: Yeah, maybe just kind of outletting a fear and talking about a fear in a way that's safe and so it makes you feel better. You go, "Oh, in this scenario I'm freezing, and then you go, oh, it isn't that bad." (laughs)

Shock: What about the spiritual elements inherent in this movie?
Shyamalan: The Native American culture, that's all it's about. My middle name, Night, is actually an American Indian name. That's what I felt so attached to as kid in the American Indian culture, is the relationship to nature and worshipping the sky, the Earth, the rock, the bear over there. That relationship felt correct then as a kid and it feels correct now as an adult. It's interesting how in all our religions so little is really said about how we should feel towards nature. It's an interesting thing to get the hierarchy back in line with the way it is. We're just one of many living creatures on the planet.