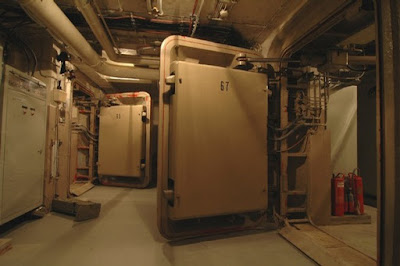 writes SYLVIA WESTALL for Reuters, in a story from Berlin, in March 2008:

Germany's largest Cold War bunker, designed to protect the former West German government from a nuclear attack, will creak open its pressurized metal doors to the public this weekend.

Buried beneath the western town of Ahrtal near Bonn, the seat of the former Federal Republic, the bunker was designed to protect 3,000 people for up to a month. [Editor's note, this blog: And this kind of bunker could be used for survivors of global warming "events" in the far distant future, housing people for periods of up to 500 years. Such "bunkers" also exist in France, Italy, Norway, Sweden, Spain, England, Canada and the USA...]
Now nearly two decades after the fall of the Berlin Wall, visitors will be able to examine the bunker's control center, presidential conference room and pay a visit to its decontamination chamber.

"It's a very imposing place. It makes you feel quite tense and uneasy when you think about the lack of daylight and how people would have had to live and work there for days on end," said Heinz Schoenewald, tour guide at the Ahrtal tourism board which offers site visits.

The site was originally dug in 1903 as a railway tunnel to France. During World War Two, the Nazis used slave laborers from Auschwitz and Buchenwald to expand the site in which they stored V2 rockets.

It was transformed into a bunker by the West German government between 1960-1972 at the height of the Cold War and became a sprawling 17-km (10.6-mile) maze of tunnels. [Editor's note, this blog: Imagine it being used as a polar city staging place as well in the far distant future, year 2500 or so, when global warming causes major upheavals in civil society around the world...]

At a cost of 5 billion deutschemarks in the 1960s, roughly euro 10 billion (US$15.19 billion) in modern money, it was Germany's most expensive Cold War bunker and boasted nearly 1,000 bedrooms, around 900 offices and five hospitals.

[YES, look at the images in the story link. This could be a future polar city as well. Use your imagination!]