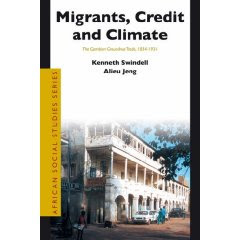 New term, coined by Robin Bronen in Alaska: climigrants. climate migrants. get used to it.
Dr Lovelock has predicted it. Millions, billions, will migrate north from central and middle regions to Alaska, Norway, Canada, Iceland, Greenland, New Zealand, Tasmania. This is the future.

Reference: [PDF] A New Kind of Migrant As a longtime worker with refugees and ...- 6:09pmFile Format: PDF/Adobe Acrobat - View as HTML

Robin Bronen's research focus on “climigrants” is an especially strong fit for Alaska EPSCoR, which integrates. social science with hard science in examining the ...
www.alaska.edu/epscor/highlights/Bronen-Web-pdf.pdf - Similar pages - Note this


Note from Robin Bronen: July 2, 2008: "Thank you for your e-mail, and yes, I wrote the paper and coined the term climigrants and climigration. Climate change in the Arctic is happening and profoundly impacting indigenous communities."
Posted by DANIELBLOOM at 6:56 PM

"Few seem to realise that the present IPCC models predict almost unanimously that by 2040 the average summer in Europe will be as hot as the summer of 2003 when over 30,000 died from heat. By then we may cool ourselves with air conditioning and learn to live in a climate no worse than that of Baghdad now. But without extensive irrigation the plants will die and both farming and natural ecosystems will be replaced by scrub and desert. What will there be to eat? The same dire changes will affect the rest of the world and I can envisage Americans migrating into Canada and the Chinese into Siberia but there may be little food for any of them." --Dr James Lovelock's lecture to the Royal Society, 29 Oct. '07

I’m reminded of the bumper-sticker, “Earth First: We’ll destroy the other planets later.”