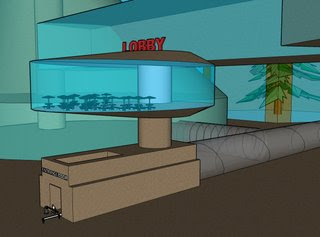 Received an email note from a top scientist studying global warming issues in Alaska, at a major research base there:

Thanks for the recent IPS news update about your polar cities PR campaign. As I have mentioned previously, under present-day conditions and those predicted by climate models for the next few decades (which is the time frame that I would argue is of most immediate concern) life in the polar regions as you envision it will continue to be more expensive and energy intensive than in most other regions on the globe.

Whether a thought experiment such as the one that you are promoting can help focus the discussion is an interesting question, and I'm not sureabout the answer.

Clearly mitigation of and adaptation to climate change are key issues but on much shorter times cales and probably using different approaches than what you are advocating.

One aspect that I do think is interesting and important to stress is that people in East Asia generally appear to be much better at what Iwould call compact living, i.e. little use of space and energy resources (compare average per capita energy use in Japan with that in the US), than we are over here in the USA. Creating awareness and fostering international communication and exchanges on such issues (i.e., what you are working on) appears to be important here. Good luck with your work."
Posted by DANIELBLOOM at 5:33 PM