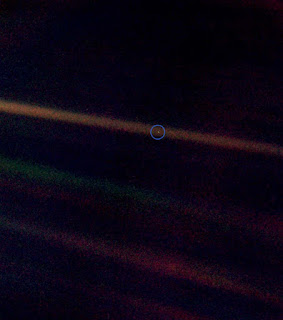 How many readers around the world have had dreams (or nightmares) about climate change anxiety or global warming panic?

A well-known science fiction author from Canada recently noted a nightmare she had recently, early 2008, and it went like this:

"A few days ago, I had a very weird experience: I gasped awake from a dreadful nightmare. This is weird, because I never remember my dreams. Well, this one was vivid and had me roiling in emotional turmoil. It began vaguely with me and my family in a restaurant in some unrecognizable part of town…it was midday and we were watching an alarming news release about linked turbulent weather patterns all over the globe.

The tension that emanated from everyone was palpable, as though I could feel the tension of every person on the planet.

I noticed that the sky looked queer, strange.

It had grown dark like a deep sea storm and I noticed the clouds flaming with crimson.

Drawn by curiosity mixed with dread, I slipped outside to get a better look and walked up the hill a bit to see beyond the building.

What I saw was spectacular at first then terrifying: the flame-rimmed clouds were racing across the sky at breakneck speed and against them in gold ochre shades I could make out the silhouettes of the continents, as though the burning sun had flung them up there (okay, so this is a dream, folks!)…

I could actually feel its rotation speeding up! I could feel the centrifugal pull of its motion unbalancing me.

When I awoke, a dark heaviness and foreboding clung to me that I found hard to shake. It stayed with me the rest of the day."


LINK
Posted by DANIELBLOOM at 5:21 PM

WOW! This is like a deja vu, Dan! ... LOL! It would be interesting to know how many of us are having dreams like this, though, don't you think?

Yes, SFGIRL, you are right. I hvae the feeling that many many people around the world are having these kinds of dreams now, in the past ten years, what with terrorism stalking the world, global warming kicking up a dust storm of debate pro and con, and the Arctic ice melting in the summertime. There must be a whole new dreamscape arising........Your dream images were really powerful!