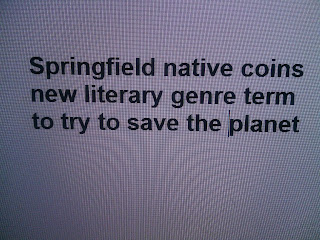 He grew up in Springfield on Trinity Terrace in the Forest Park area until he was six years old, when the family of seven -- housewife mom, medical doctor dad and five kids, 3 girls and 2 boys -- moved to Longmeadow.
There he attended elementary school, junior high school and high school.  Graduating from Longmeadow High School in 1967, he applied for early admission to Tufts and joined the Class of 1971 in the fall of that year.
At Tufts he studied world literature and creative writing, stuyding under poet Maxine Kumin and French novelist Celia Bertin. He spent his junior year abroad in Paris, mostly watching movies and drinking coffee at sidewalk cafes, and getting a job as a proofreader at the Dictionary Larrouse headquarters.
After Tufts, he started travelling and working a variety of odds jobs to pay the rent, from managing an art gallery in Washington DC to working as a youth counsellor at a home for troubled teenagers in Juneau, Alaska.


In Alaska, he also started his newspaper career, editing the Capital City Weekly in the mid-1980s and then taking staff reporting jobs at English-language newspapers in Tokyo and Taipei. Reporter,  editor, proofreader, columnist, he made a little money along the way but not much. Now almost 70 years old, bald on top and long white hair on the sides and back, the eccentric ''climate missionary'' devotes himself to editing the Cli-Fi Report -- cli-fi.net -- and spreading the gospel of ''cli-fi'' -- a term he coined as a PR tool to raise awareness of the climate crisis we face -- far and wide.


"I'm a cli-fi missionary'' he says.
What's cli-fi? It's a subgenre of sci-fi. One of his sci-fi heroes was the writer Isaac Asimov who lived in Boston.  He feels that cli-fi novels can cut through the bitter divide among right wingers and liberals over the global warming debate. A small Springfield philanthropy has been funding Bloom's work on cli-fi, he said, adding he's grateful for the sponsorship.


"We are a nation divided bitterly over climate change issues," he says. "Novels can serve to wake people up in ways that politics and ideology cannot."


He calls himself a radical centrist.
"I believe if the world does not wake up soon, future generations of humans will be 'doomed, doomed' -- within 500 years." he says. "I can see that far ahead. I'm a visionary. Born and bred in Springfield, nurtured by a loving family and educated at the public best schools around. Massachusetts was my foundation base and still is, although I've since made the world my home.  Will 'cli-fi' save the planet? No way. But at least it might help prepare us for what's coming in future centuries. I think long term.
I'm not worried about the next 100 or 200 years. It's the kids born 30 generations from now that I'm worried about. I have a deep wellspring of empathy for  future generations. I care about the world then. Today, no problem, life is wonderful. We'll be okay. It's people living in the year 2500 A.D. that I am thinking about. That's what cli-fi means for me."
His 'cli-fi' term has gone viral -- and global -- social media with its own #clifi hashtag, too. News articles about cli-fi since 2013 have appeared on over 500 newspapers and media outlets since a 2013 NPR radio segment start the ball rolling. After that came reports -- and headlines -- in the New York Times, the New Yorker magazine, the Atlantic magazine, Slate, Salon and the BBC in England.

Will that rise of cli-fi novels and movies make any difference? He  says he wouldn't be doing this work 24/7 since 2007 -- all as an unpaid and independent literary gadfly -- if he didn't think what he was doing would make some kind of difference in the world.

"I never set out to make money," he says. "I only wanted to make a difference. Now as I reach 70, I am seeing a little success along those lines. I'm still as poor as a churchmouse, and I don't own a house or car or anything. I ride a bicycle to get around. I rent everything, my home, my computer, my telephone. I'm not interested in fame or fortune, and I am not making a single penny from this cli-fi work. I living on borrowed time, as I coast toward the end of my short life on planet Earth, I've got a stent in my heart keeping the blood flowing through my placque-caked arteries, and I'm using my life's savings, such as they are, to fund my work now. It's a joy. I wake up every morning full of optimisim and hope. It's my DNA! I go to sleep at night depressed and blue. That's also my DNA! We are living in very troubled -- and troubling -- times. But I am at peace with life. Life is good.  Except for this climate change meshagus."

When asked how the cli-fi term came to him, he replied:
"The 'cli-fi' name came to me as I was thinking of ways to raise awareness of novels and movies about climate change issues. I toyed with using such terms as ''climafic'' or ''climfic'' or ''clific,'' for the longer term of "climate fiction." But I wanted an even shorter term that could fit easily into newspaper and magazine headlines. So using the rhyming sounds of ''sci-fi,'' I decided to go with the short, simple to say and simple to write "cli-fi". And the short term caught on worldwide, beginning on April 20, 2013 when NPR radio did a five-minute radio segment about ''cli-fi.'' That was the beginning of its global outreach and popularity among academics, literary critics, journalists and headline writers."

Asked if he had a personal motto for this climate work, he said:

"Curious, empathetic, compassionate: What we should all be as human beings. And then we die."

A small Springfield philanthropy has been funding Bloom's work on cli-fi, he said, adding he's grateful for the sponsorship.

You can schedule an interview at:

Posted by DANIELBLOOM at 9:26 PM