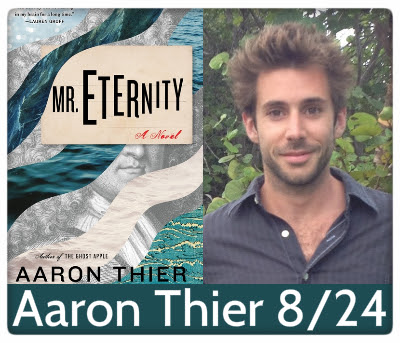 UPDATE! News article headline: "In time of future disaster, there still will be humor" - http://www.sdjewishworld.com/2016/08/18/in-time-of-future-disaster-there-still-will-be-humor/
"Mr Eternity" is a funny, joyful novel, a heartwarming book about climate change

A Preview By Dan Bloom
Special to Cli-fi.Net

Aaron Thier is a novelist based in western Massachusetts, and this latest novel "Mr. Eternity" has just been published by Bloomsbury in New York. The time-travelling novel is both a comic novel and a very serious novel, and it has been characterized already by readers variously as ''literary fiction,'' ''sci-fi,'' ''apocalyptic dystopian,'' ''fantasy'' and ''cli-fi.'' And ''a comic novel,'' as well. More on that later.

In a recent email interview, we were lucky enough to find Mr Thier at home and he graciously took the time to answer some of our questions. Now his early 30s, Thier did his undergraduate work at Yale, majoring in literature (Class of 2006), and later completed a Creative Writing MFA at the University of Florida in 2012.

Thier's surname has an interesting backstory, and when asked about it, he told us:

"Thier and  is my birth name," he said. "My parents decided that Thier was more interesting than Murphy (his father Peter Murphy, an English professor at Williams College) so we all have my mom’s name. This hasn’t produced as much confusion as you might think. People seem charmed by the matriarchal orientation."

In addition, in connection with his mother's surname, a former president of Brandeis University in the early 1990s was her father, Thier's grandfather, Samuel Thier.

"I wish I knew more about where the Thier name came from," he said. "I know that the original Samuel Thier, my great-great-grandfather, was an actor in the Yiddish theater in Warsaw, Poland, but I don’t know much else."

When asked why his new novel has a strong climate-change theme, and how that came to be in this Anthropocene Age of novelists and screenwriters probing various climate future scenarios, Thier replied:

"I’m not as plugged-in as I might be, but I can say that it was my perception, while writing 'Mr. Eternity,' that no one was addressing these issues in a way that was satisfying to me<" Thier said. "I could be wrong about this. I tend to read pretty widely, lots of things in translation, and I’m not always as aware as I might be of what’s going on in contemporary American literature. In any case, [climate change is] a tough subject. Hard to get the science straightened out. Hard to make sense of the byzantine policy problems, too. When I hear politicians deny the reality of climate change, I’m so angry that I can’t think, and that doesn’t make for good literature. Unless you police yourself very carefully, strong personal feelings almost always disturb the integrity of the fiction. In the end, I don’t think literature handles politics very well, which is why I wrote instead about the tactile reality of a particularly catastrophic climate change scenario."

How to categorize his new novel?


"'A Novel' is good enough for me," Thier said. "It belongs to that most nebulous of categories, 'Literary Fiction,' which essentially just means fiction about what it feels like to be a human being."

In an earlier interview with a literary critic in Florida, Thier said that for some reason, a personal reason, he cannot bring himself to publish a new novel without having already written and completed his next novel already. When asked why this was so, he explained: "It’s just that I anticipate losing my mind when a book comes out. I get wrapped up in how it’s selling or who’s reviewing it, and those concerns are not compatible with my writing life. I need to be thinking about the thing I’m working on and nothing else."

And so, yes, Thier has already written and completed his next novel, although he's keeping the title under wraps for now. The next novel's future publication date has not been set yet, but when asked what the new book is about, he was happy to describe it in brief.

"It’s about a young couple who are chased across America by Yahweh, the Old Testament god," he said. "The joke is that they are agnostic secular humanists, so the existence of such a god is a test of their faith. How can we live a just life if God exists? If the god that exists is the god of the Old Testament, I mean, who’s anything but benevolent."

When this blogger asked if the ''cli-fi'' literary term could be applied to "Mr Eternity," Thier said if any reviewers wanted to use that term, it was fine with him.

"Anything we can do to get people to pay more attention!" he said. "I like it, yes."

In an earlier interview with Andrew Donovan in Florida, Thier was asked: ''Why have Old Dan end up in Key West, of all places?''

Thier replied:  ''Because the Keys are fragile — in 200 years, they won’t exist — and the book is obsessed with disappearing things.''

Later in the same interview, Thier said of the Florida Keys: ''Well, I think of the Keys again. The issue for me is not so much that they’ll disappear as that it will be like they never existed, because no one will be left to remember them.''

Since framing the issue of climate change that way, in that some things might disappear from the face of the Earth forever and there will be nobody left to remember them, a concept that resonated deeply with this blogger, I asked Thier where that  idea come to him from. And as usual, he had a ready answer.

"I was thinking about what the inundation of a coastal community would really mean," he explained. "To us, it’s a disaster we dread — part of the nightmare future. But once it has already happened, it will be part of the past. It’s easy to forget that. It will be an event that exists in memory, in history books, which is to say it’ll be half-imaginary and increasingly subject to distortion. In a few centuries, no one will remember Key West. They’ll remember that there was once a place called Key West. An important difference. A terrifying thought."


When asked if he was a pessimist or an optimist in regard to possible climate change outcomes in the future, Thier said: "I’m a pessimist in the sense that I don’t think we’ll get it together to avoid a catastrophic outcome. In many important ways we’ve already missed the boat by a long way."

However, he added: "But I’m an optimist in the sense that I believe in human resourcefulness. I don’t think this represents a threat to human existence, only a threat to human civilization as it’s currently configured. People will eke out a living somehow in a brutalized world. There will probably be fewer of us, maybe way fewer."

The title -- "Mr Eternity" -- is an intriguing one, and when asked when and where and how it came to him, he again had a ready answer: "I was wandering around in the ice and snow during the very cold winter of 2013-14 and it popped into my head. I’d already written the book; I don’t usually have a title in mind when I’m writing. I like it because it communicates the essential playfulness of the main character."


The $500,000 MacArthur Fellowship -- often called the "Genius Grant" -- goes to young writers in America who are deemed worthy of the award, and it's already gone to Colson Whitehead and a good many others over the years. When asked if the fellowship was awarded one year to him and and if he could like that and what it would mean to him, Thier said: "Good Lord, yes, if good use means meeting the basic financial obligations of daily life. Food, lodging, etc. I like to think we’d do something extravagant, but mostly it would mean we could live like secure prosperous people for a while. It is very very hard to make a living as a writer."


Thier said that he prefers to write his novels (and sign publishing contracts for them) as stand-alone novels.

"I don’t think I’d feel comfortable signing a multiple-book deal, even if that were an option. I’d feel superstitious about it," he said.

For our final question, we asked Thier if there was anything else he wanted to add to our informal conversation, in terms of how he hopes "Mr Eternity" will be perceived by readers nationwide.

"I’m anxious for people to understand that it’s a funny book, a joyful book," he said. "It is very much not austere dystopian fiction. A heartwarming book about climate change! Not that it minimizes the scale of the disaster."
Posted by DANIELBLOOM at 6:31 PM