Professor Malcom Sen, a native of India, with a PHD from University College Dublin, is teaching an important cli-fi course at UMASS in Amherst, Massachusetts this fall semester 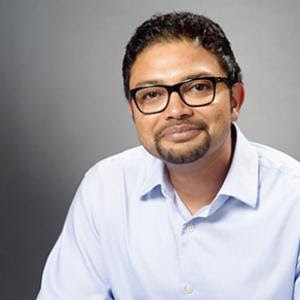 This FALL SEMESTER 2016 he will be teaching a cli-fi course. Details below


PROFSSOR Malcolm Sen received his BA from the University of Calcutta, India and his MA and PhD from University College Dublin.

Wednesdays, 6:30-9:00 pm
What is the role of the humanities, especially literature, in an era of climate change? At a time of diminishing futures it seems that action on climate change has been relegated to the short timescales and utopian rhetoric of international policy and the even shorter timescales and business-as-usual vocabulary of the global market. However, climate change is a multi-generational issue with exponential environmental, social, gendered and corporeal effects. In this course we will deliberate upon the languages used to understand, critique and narrativize environmental degradation, and read literary texts that directly engage with climate change. We will read contemporary novels from a variety of genres: cli-fi (climate fiction), social realism, speculative and post-apocalyptic fiction, petro-fiction and a thriller. Discussions will elaborate on the multi-scalar and interconnected complexities that define environmental realities, ecological imperialism, the financialization and nuclearization of the planet, and the gendered aspects of climate change effects. The change of climate change is principally environmental but in effect social, an area which is predominantly within the discursive realm of the humanities. Indeed, this division between the environmental and the social is itself misleading. Narrating our present and our history differently, this course will argue, may allow us to reveal alternative and liveable futures.


Malcolm Sen was the Irish Research Council and Marie Curie Elevate Fellow at Harvard University (2014-2015). Previously, he was awarded the National Endowment for the Humanities Fellowship at the Keough-Naughton Institute for Irish Studies at the University of Notre Dame (2011-2012). His other awards include a Humanities Institute of Ireland Research Scholarship (2002-2006) and the Moore Institute Visiting Fellowship at the National University of Ireland Galway (2014). He received his BA from the University of Calcutta, India and his MA and PhD from University College Dublin. He has taught in a number of Irish universities, including Trinity College Dublin, the National University of Ireland Galway and Maynooth University. His research has been published in key journals and books and he recently co-edited Postcolonial Studies and the Challenges for the New Millennium which was published by Routledge in January 2016. He was one of the researchers of the landmark PBS / RTE documentary on the Easter Rising in Dublin in 1916 which is currently being aired. Malcolm is the series editor of a podcast series on “Irish Studies and the Environmental Humanities” that is widely available for download online. He is currently completing his book project, Environment, Narrative and Sovereignty.
Posted by DANIELBLOOM at 4:54 AM