What Is ''Cli-Fi'' and Why Does It Matter? by SFF and CFF author Brian Burt

What Is 'Cli-Fi' and Why Does It Matter?
Brian Burt writes:
Brian Burt writes both short and novel-length speculative fiction. His short story “The Last Indian War” won the Writers of the Future Gold Award and was anthologized in Writers of the Future Volume VIII. His debut novel, Aquarius Rising: In the Tears of God, won the 2014 EPIC eBook Award for Science Fiction, and the sequel, Aquarius Rising: Blood Tide, has just been released by Double Dragon Publishing. You can sample his writing at http://www.briantburt.com.

http://www.sffworld.com/2015/10/what-is-cli-fi-and-why-does-it-matter-by-burt-brian/
http://www.sffworld.com/2015/10/what-is-cli-fi-and-why-does-it-matter-by-burt-brian/
BRIAN WRITES:
Science fiction writers have always drawn inspiration from emerging scientific trends and topics, especially those that spark controversy. It’s not surprising, then, that quite a few writers have set recent novels in worlds turned upside down — or at least sideways — by global warming.
My own first novels, In the Tears of God and Blood Tide (Books 1 and 2 of the Aquarius Rising trilogy), have climate change as a central theme. Enough books and authors have used global warming as a story driver that media sources like NPR and Wired proclaim a new literary genre called “climate fiction” or “cli-fi.”
This has prompted many SF veterans to sigh, roll their eyes, and point out (validly) that this is nothing new:  SF has a rich history of tackling environmental themes, and “cli-fi” is [at best ]a loose subcategory of classic science fiction.

I see why the SF community bristles at the implication that this style of fiction represents something completely new.

Great SF writers have indeed explored the territory that includes climate change, environmental disaster, and ecological imbalance for decades and have found fertile ground there. (Fertile for the writers; perhaps not so fertile for the story’s main characters, who may be left wandering through parched and barren hellscapes.)

Frank Herbert’s Dune series is a perfect example. Kim Stanley Robinson has mined this rich story vein brilliantly for years. And I still remember being mesmerized by Ursula Le Guin’s “The Word for World Is Forest.”

So, for science fiction fans, this is nothing new. What’s changed, then (besides the melting polar ice, rising seas, violent weather patterns, and mean Earth temperature)? I’d say two major factors contributed to the emergence of “cli-fi” in the public eye.

First, the evidence for global warming has become dramatically visible to people in their everyday lives. Extreme weather events and the nearly unanimous consensus of climate scientists have shifted popular perception of this issue. Even the deniers grudgingly admit that something is happening, although they might argue about the root causes.

Second, the theme of climate change has begun appearing in the work of acclaimed “mainstream” literary fiction writers like Barbara Kingsolver (Flight Behavior) and Margaret Atwood (MaddAddam Trilogy). Although this rankles some SF folks who feel that we’re treated like “second-class literary citizens,” the reality is that mainstream fiction writers carry more weight with traditional media sources. (And Kingsolver’s and Atwood’s books are wonderful — I highly recommend them.)

New genre [of CF] or just newly recognized SF sub-genre, this can be a positive development for writers of speculative fiction with a passion for environmental themes. And, for those of us who also feel impassioned about environmental causes, it’s a win-win.

I believe fiction can communicate messages (like “we’re mortgaging our planet’s future for short-term economic gain”) in ways that are more visceral than nonfiction books addressing similar concerns. Facts can move the mind, but fiction can move the spirit.

Fiction writing is not activism… but infusing core beliefs into a story can make that tale more vivid and thought-provoking if it’s not done in a preachy, heavy-handed way. 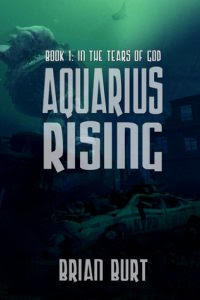 Cli-fi reflects a growing movement among writers in and outside of science fiction who develop stories around a central premise of “what if global warming really does proceed unchecked?” What will the world look like if weather patterns alter drastically, the cycle of seasons becomes unrecognizable, coastal mega-cities flood, large swaths of land become arid wastelands, and masses of people are forced to migrate away from their homes in search of less hostile environments?

What kind of social and political chaos will result, and how will we cope? Will we try to geo-engineer a solution on a planetary scale, and what if there are unintended consequences? Will humans be forced to tweak their own genetics to adapt to the harsh conditions that constitute Earth’s “new normal”? A

ll of these questions fueled my own writing as I began the Aquarius Rising trilogy, and they’re still propelling my imagination as I work on the final novel, The Price of Eden. I can’t wait to see how things turn out.

Is it really cli-fi or just good old sci-fi? Ultimately, I’d argue that it doesn’t matter what label media or marketers assign as long as readers enjoy the books and consider the implications. Science fiction has a proud history of presenting cautionary tales about possible dystopian futures. Very few of the cli-fi books I’ve read so far conclude on an optimistic note. Maybe, together, we can write a happier ending!

Brian Burt writes both short and novel-length speculative fiction. His short story “The Last Indian War” won the Writers of the Future Gold Award and was anthologized in Writers of the Future Volume VIII. His debut novel, Aquarius Rising: In the Tears of God, won the 2014 EPIC eBook Award for Science Fiction, and the sequel, Aquarius Rising: Blood Tide, has just been released by Double Dragon Publishing. You can sample his writing at http://www.briantburt.com.


MORE
Brian Burt became addicted to science fiction, fantasy, and horror stories as a boy while reading to pass the long hours spent driving to and from swim meets around the Midwest. His love of fiction evolved into a desire to tell his own stories, which sometimes got him into trouble. ("I swear, an alien ate my homework!")
Instead of pursuing a writing career, he got into computer programming because that was, by all accounts, more "sensible." While on a consulting assignment in Dublin, Ireland, he became sufficiently inspired by the magical scenery and the rich literary tradition to try writing his own short stories. He had more than twenty science fiction and fantasy tales published in small press anthologies, genre magazines, and online publications over the years. Along the way, a short story entitled "The Last Indian War" won the Gold Award (grand prize) in the Writers of the Future Contest, and a dark fantasy story called "Phantom Pain" received an honorable mention in The Year's Best Fantasy and Horror, edited by Ellen Datlow and Terri Windling. These encouraging experiences finally gave him the motivation to try his hand at a full-length novel.
That debut novel, Aquarius Rising Book 1: In the Tears of God, won the 2014 EPIC eBook Award for Science Fiction. Aquarius Rising Book 2: Blood Tide has now been released as well from Double Dragon Publishing, and Book 3: The Price of Eden is well underway. This trilogy of novels stems from Brian's passion for environmental themes, exploring a potential future in the wake of accelerating climate change when a disastrous attempt to reverse global warming goes horribly wrong. The series focuses on human-dolphin hybrids called Aquarians who have built thriving reef communities among the drowned human cities along the coasts but are caught in an escalating struggle with human scientists determined to restore the continental wastelands at any cost.
Brian is married to a brilliant woman, a former software engineering colleague, who has long been his first reader and most trusted editor. He works as a cybersecurity engineer to pay the bills and lives in Plainwell, Michigan, with his wife and three sons, a corn snake named Jake, and an aging white German shepherd named Sif (after Sif the Great Grey Wolf from the Dark Souls video game franchise). His sons named the dog; Brian hasn't seriously played video games since the Pac-Man era.
Brian enjoys reading, cycling, hiking, horseplay, red wine, and local craft brews (so hopefully the virtues balance the vices, more or less).  At every opportunity, he uses his boys as an excuse to act like an unruly kid (which is why his wife enjoys rum, school days, and migraine medication). He hopes to keep writing speculative fiction novels with environmental themes, improving as a storyteller, and building a like-minded audience to visit imaginary worlds with him.
Posted by DANIELBLOOM at 9:26 PM