Between Fact and Fiction: Climate Change Fiction Workshop in Germany 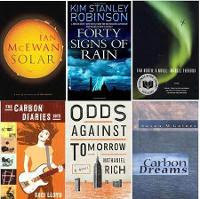 The scientists have done their job--they’ve issued every possible warning, flashed every red light. Now it’s time for the (…) artists, whose role is to help us understand what things feel like. -- Bill McKibben, Introduction to I’m with the Bears

Novels and short stories that depict research on climate change and/or its ecological and social ramifications have been gaining in prominence.

In the U.S. in recent years, fiction that deals with climate change is being discussed in the media under the label “cli-fi” (climate fiction) and billed as a new genre. Cli-fi is moving into university curriculums and generating controversial debates about the function of literature and art in the societal reaction to climate change challenges. See: cli-fi.net

From a sociological perspective, we are interested not so much in the question of literary classification as in the (self-)positioning of cli-fi as a boundary genre that picks up literary, scientific, political, and general societal discourses and articulates them in a new way. The self-representations of authors as well as the comments by reviewers in scientific and literary media reveal a literature that actually aims to elucidate scientific knowledge and even attempts to inspire readers to political action. Thus cli-fi serves as a cultural focal point for re-imagining the future socio-ecological consequences of global warming.

On the one hand, cli-fi exhibits patterns typical of any socially engaged fiction, taking socially significant topics and translating them into individualized, emotionally affecting stories in order to evoke such feelings as compassion or indignation. But cli-fi also dramatizes scientific insights that would otherwise remain within the specialized discourses of scientific disciplines or would become accessible to a wider audience only via classical forms of science communication (i.e. science journalism or popular non-fiction). Can these aspects of clif-fi play a role in understandings of science and its place in society, and if so how? This question has, to date, received little scholarly attention.

Cli-fi often transcends the traditional divide between the sphere of facts (science) and the sphere of fiction (literature/art). Whereas “weather” is directly perceivable, climate – and even more so processes of climate change spanning decades and centuries – is only conceivable through forms of narrative. This narrative quality of climate takes on even more significance when it comes to describing the future ramifications of global warming, which is an essential part of climate change debates. Here, both scientists and literary writers have to rely on fictional narratives in order to project the social and ecological consequences of climate change into the future. Therefore, some scientists have themselves switched to fictional modes of narrative—in at least one case, explicitly so (Oreskes/Conway 2014: The Collapse of Western Civilization)--in order to describe the consequences of climate change on the basis on currently known facts. What sort of crossover is there between these “scientific” and “artistic” fictions, and what similarities and differences do we see, both in the texts themselves and in their effects on readers?

With these events and questions as focal point, this workshop shall address the following issues (the list is open to further proposals):
Submissions: Abstracts of up to 350 words should be sent to sina.farzin@wiso.uni-hamburg.de before December 1st 2015. Please include (1) your name, (2) affiliation and (3) email address. In order to encourage discussion and brainstorming about this new topic, the workshop format will be relatively small and intimate, with active participation  limited to 30-35.
Workshop organization: Jr.-Prof. Dr. Sina Farzin (University of Hamburg) sina.farzin@wiso.uni-hamburg.de; Emanuel Herold, MA (University of Bremen) emherold@uni-bremen.de
Posted by DANIELBLOOM at 6:43 PM