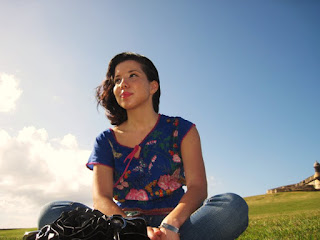 Note: she's looking for a publisher, if anyone is interested

by staff writer, The Cli-Fi Report


ALBANY, NEW YORK -- For Michelle Fernandez, climate change and global warming worry her. At 27, she's a Millennial and has a strong feeling about what might be coming down the down the road, if world leaders do not stop global warming in its tracks, before it's too late.

So she sat down to write a novel titled "Eminent Domain," set in 2016 in Albany, New York, the state capital, and in a recent email interview she was gracious enought to take the time to answer our questions.


SYNOPSIS: By 2026, sea level rise has progressed faster than even the most liberal estimates suggested, so Miami Beach and New Orleans are, for all intents and purposes, gone. Shocked into action, the American public elect a president who vows to reorganize the nation’s priorities, at a price. In order to focus funding and institutional energy on the environment, he reasons, the petty social issues that have consumed and distracted the American people for the first two decades of the 21st century must be decided upon, once and for all. Since we can’t stop arguing about immigration, the borders are all open. Since we can’t stop arguing about drugs, they’re all legal. And since the Supreme Court’s ruling on gay marriage has only bred more intolerance, marriage is outlawed entirely. This is kindergarten politics: if you can’t play nice, your toys will be taken away.
In this environment, where former weathermen predict individual futures like palm readers and you can order a pot brownie at the bar, out-of-work divorce lawyers and marriage counselors have gathered together to keep themselves relevant. Thus, in place of marriage, is birthed the romance insurance industry, wherein, for a fee, you can insure your relationship against its inevitable dissolution. In Albany, the post-industrial shell of the once-great capital of New York, Shiri Shapiro is a catastrophe adjuster who handles the toughest romance claims. Using brain scans, psychoanalysis, personal interviews and an arsenal of pseudoscience, she arrives at the scene of a breakup and determines who hurts more and who gets the money. Her reputation is unparalleled, until run-ins with a neurologically complicated customer, and the mysterious Van, a younger colleague who gets too close, expose old wounds and ambivalences, forcing Shiri to reassess her profession and her place in the world.

When asked what inspired her to write a climate-themed novel, the Albany-based writer said: "I've always been preoccupied with climate change, since I was a little girl. I was the kind of kid who sat in the basement reading about tornadoes and scaring myself to death while my peers were jumping rope.
Later, I worked in insurance for several years while putting myself through college and graduate school, and I was always perversely fascinated by the internal logic of that industry."
"There's something poetic about an industry which scares you into buying an intangible product to protect you from the unknown," she added. "I always wanted to justify all of those years wasted working a soul-crushing office job by putting my insurance knowledge to good use. It was just a matter of when and how."
The eureka moment happened likle this, she recalls: "One day I was watching the TV news and getting frustrated over the never-ending gay marriage equality debate, the bathroom wars, the public debate over these very private issues which shouldn't be up for debate in the first place. And I just thought, what would have to happen for people to stop quibbling over social issues and focus on the environment? Well, probably a few consecutive natural disasters to wake people up to reality, and then some strict laws to govern public discourse."
"I reasoned in my writerly mind: In order to stop everyone fighting about who can get married, you outlaw marriage. In order to stop everyone fighting about who's allowed in the country, you just allow everyone. And so on. And then the natural next thought was, well, some corporate opportunists would come up with some way around it. If no one could get married anymore, what would all the marriage counselors and divorce lawyers do with themselves? Hence, romance insurance, a totally corporate invention that absolutely misses the point of human intimacy. It was great. And so this world where the environment has become a central issue and the social issues are tangential to the point of being outlawed sort of came together on its own."


As for the end result of getting the novel out to readers nationwide, Michelle said: "I'm hoping it makes people think. Like all speculative fiction, it presents a possible world, and it's up to the reader to determine what implications that world may hold for the one we live in."


Michelle said that she doesn't really consider herself a climate activist, but a writer with a strong feeling to sound the alarm in her own way.
"I don't think of myself as an activist, really, and I think that was part of what I was trying to reconcile while writing the novel," she said. "Most people accept the reality of man-made climate change at this point. We know our habits need to change. We recognize the effect we are having on our planet. We register it all, intellectually, but it doesn't translate into our daily lives. We read the reports, and then we toss our styrofoam in the trash and drive 20 miles to work. I wanted to play with this idea of complacency, of compromise that's inherent in living in an industrialized country. No matter how green you live, there's still some blood on your hands. And how do we deal with that guilt, what lies do we tell ourselves?


Then, of course, there's the power of the written word to register dissent. So I guess writing is my activism, in a way."

Michelle's debut cli-fi novel is set in the near future of 2026, she said, because she


wanted it to be in the future, but close enough to be conceivable.


"One of the biggest challenges of climate change is that the threat isn't sufficiently immediate to inspire action in most people. So I imagined a world where the timeline is sped up, but not by much," she said.


About the title of her novel, Michelle explained that the concept of ''eminent domain'' looms large in Albany's history.

"In the 1960s, then-Governor Nelson Rockefeller invoked 'eminent domain' to clear out and demolish a forty-block chunk in the heart of the city, Albany's oldest immigrant neighborhood, scattering its residents into the suburbs," she said. "In its place, he built the Empire State Plaza, a massively expensive government office complex which, for many people in Albany, persists as a giant symbol of centrality in government gone wrong. I'm interested in the idea of public vsersus private property and the limits of control. It became a natural metaphor for human relationships. Who has a right to whose heart? "


When asked if the main character Siri Shapiro in "Eminent Domain" was based on her own life at all, Michelle said: "I wanted my protagonist to come from one of the ethnic groups who were largely displaced by the construction of the Empire State Plaza, which includes most of your garden-variety New York immigrants of the early 20th century: Jews, Italians, Greeks, Irish. Siri's Jewish because the environmental consciousness built into Judaism speaks to the central theme of the novel. And because I'll take any excuse to sprinkle some Yiddish into my writing."
"Siri's got some of me in her, as all of my characters do, but I wouldn't call her my alter ego. Maybe more of an alter id. She's very impulsive," she said.


Michelle works part time in two different college libraries in the New York capital region. She studied English and Judaic Studies in college at SUNY Albany, then got a masters degree in English literature at the University of Puerto Rico. After teaching college writing for a while, she decided to come back to Albany to study for an masters in science degree in library science, which she completed in December 2015.


When asked if being a librian gives her a sense of how important climate novels can be in America today, Michelle had a ready answer.
"Yes," she said. "I think people are warming (pardon the imagery) to the idea that our planet is changing. Minds are opening, albeit painstakingly slowly. People are more willing to read about it and talk about it than ever before."
"Unfortunately, that usually comes in the form of dystopia, of apocalyptic fiction, of extremes, she added. "I think people seek out disaster fiction because it's farther from reality, easier to keep a distance."


When asked how she, as a librarian with a lot of experience in categorizing  categorizes her "Eminent Domain," Michelle said she likes to call it "literary speculative fiction."


When asked why climate change issues are important to her, Michelle, a twenty-something Millenial, said: "It is the single biggest existential threat facing the human race in my lifetime, and the biggest moral challenge to my generation."


A reporter wanted to know why Michelle thinks so-called climate-denialists are so much in denial.
"Because the truth is scary, she replied. "It's very human and very understandable. But such a head in the sand attitude, in the face of all the scientific evidence about man-made global warming, is also unfortunate."
Asked the usual question, "are you an optimist or a pessimist about climate change, Michelle said: "I try to stay positive, but I read far too much to justify unsubstantiated optimism. We have a lot of work to do."

Michelle's personal outlook on life, her philosophy of life?

"Maximize personal enjoyment, minimize negative impact on the world around you," she said, without missing a beat.

When asked which cli-fi novel already published she has enjoyed reading the most, Michelle said she liked ''The Stone Gods'' by Jeanette Winterson, a complex and cautionary climate-fiction tale.

In the course of writing this interview profile, we learned that Michelle has a rare neurological condition called "hydrocephalus," and when asked if living with the medical condition and undergoing six brain operations inspired or motivated her or influenced in the writing of the novel, she explained it this way.


"Illness and pain are naturally isolating, so my life has lent itself to writing in a big way," she said. "I've had six brain surgeries over the past decade. It forces you to reorganize your priorities, to develop an inner strength and self-reliance that can be really daunting. Another running theme in the novel is individual suffering versus the suffering of the planet, and that is obviously drawn from my own experiences."
When asked her how health is now, and if in the forseeable future her condiition can be easily managed, she replied; "As you know, I suffer from hydrocephalus, which is an incurable neurological condition whose only form of treatment is surgical. I have an implanted device, called a 'shunt,' which re-routes the excess fluid from my brain into my abdomen. When everything is working, I am fully functional. I have pain sometimes, and because my condition has to do with the fluid pressure in my brain, I am unusually affected by changes in air pressure. I'm essentially a human barometer. But it's manageable."
"However, when the shunt malfunctions, which is difficult to predict, I need brain surgery," she added. "So it's hard to tell. Right now, I feel fine, but it can change very quickly. The hardest part to adjust to is that unpredictability."