Meet Aase Berg, a Swedish writer demonstrating that poetry is quite a powerful form when it comes to interesting exploration of environmental issues. 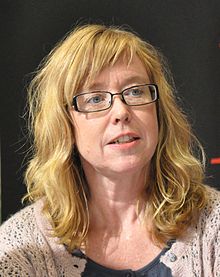 Swedish poet Aase Berg and other writers are demonstrating that poetry is quite a powerful form when it comes to interesting exploration of environmental issues, according to Jeff Vandermeer in a recent interview wiew with Lauren Sarner.

''I ....think Aase Berg and other poets are demonstrating that poetry is quite a powerful form when it comes to interesting exploration of environmental issues. ''

Who is AASE BERG? Wikipedia says:

https://en.wikipedia.org/wiki/Aase_Berg
FULL QUOTE:
Because we’re now fairly deep into the middle of this slow apocalypse, writers of fiction set in the here-and-now can speculate quite effectively without recourse to the science-fictional. My next novel is science fiction and deals with issues of biotech, scarcity, and survival. But the one after that is set in the present-day and has no speculative elements. That happened naturally, but I think it also happened because we are, as they say, already living in the SFnal future. I also think Aase Berg and other poets are demonstrating that poetry is quite a powerful form when it comes to interesting exploration of environmental issues.

So, the short answer is: Any writer can now write “environmental science fiction.”

Aase Berg was among the founding members of the Stockholm Surrealist Group in 1986 and published an early book on their publishing company Surrealistförlaget in 1988. During the late 1990s she emerged as one of the most prominent young poets in Sweden and has since 1997 had several collections of poetry published by various branches of the Bonnier publishing house, the largest and most prestigious in Sweden. Aase Berg made her debut as a prose writer with a short story in the collection Perversioner: 12 noveller om avvikelser, published on Vertigo, the publishing company of Carl-Michael Edenborg, another member of the Stockholm surrealist group. Berg has also been editor of the literary journal Bonniers Litterära Magasin (commonly known as BLM), has contributed to the journal 90tal, later renamed 00tal, and is a critic for the newspaper Expressen.
Posted by DANIELBLOOM at 10:46 PM