UPDATE: *** A Canadian novelist sends me an email and notes:

''Dear Mr Bloom, as for the Canada/US book you are tweeting and doing PR for, look up Richard Rohmer's 1970s novels, ''Exxoneration'' and ''Ultimatum.'' 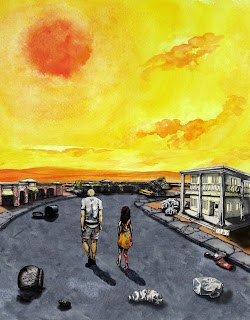 COVER of ''THE HEATSTROKE LINE''
Artwork by Emma Potriet

by Blog Staff Writer And Agencies

TORONTO -- When I spoke to my professor friend Edward L.
Rubin earlier in the year about a sci-fi novel he was writing titled
"The Heatstroke Line," he told me an interesting story about the plot
he had devised.

Rubin, who is Jewish and grew up in Brooklyn, has always been
passionatley interested in issues such as social justice and human
rights, as well as the the enviroment and law.

This summer
he traded in his academic hat temporarily for a novelist's cap, and
the result is a story set about 150 years from now
when Canada has assumed control of North America, taking Alaska into
its fold and hauling tons of Midwest soil over the old border to use
for agriculture in what what is now a very
temperate and warmed over Canada.

Sounds implausible? That's the nature of fiction, and Rubin told me he
wanted to shake things up a bit with a plot that would be sure to
captivate Canadian readers and perhaps prod American readers to think
harder about global warming issues before it's too late.

The book will be published by Sunbury Press as both an ebook and a paperback in September.

The story takes place in the near future when global warming has made
much of the Earth uninhabitable, Rubin told San Diego Jewish World in
a recent email. "But the result isn’t some 'Mad Max' wasteland.
Instead, the U.S., suffering from the heat, has broken apart into
three small, weakened nations which are all dominated by Canada, which
has taken over Alaska and New England and transported the topsoil from
the American Midwest to Canada’s newly temperate arctic regions."

The American South has become so hot that it is barely inhabitable,
especially below the so-called "heatstroke line," which is basically
the old border line between the North and the South in the U.S. Civil
War of the 1860s. In addition, the South is afflicted by savage,
flesh-eating bugs called "biter bugs" that have developed as a result
of the climate change, Rubin said in describing his science fictional
plot to me.


Rubin told me he wrote the novel partly as entertainment and partly as
a wake up call for climate denialists.

"Why are so many people prepared to jump on the denial bandwagon?"
Rubin said. "One answer might be that government officials in Canada
and America cannot face the possibility of nationwide or worldwide
disasters. Proponents of global warming, it could be argued, have
predicted a future that is just too grim to contemplate."

But Rubin said he didn't create the plot to irritate Canadians or Americans.

"The geopolitical elements of the story just came to me, and I wrote
it down that way," he told me.

Some quotes from the novel shed some
light on the friction that develops in the novel between Canada and
the former Lower 48 states which are now divided into three separate,
desperate regions.

One character in the book says to a lab colleague: "It took three
years for them to transport all that Midwest topsoil to Canada, even
with those giant trains. Just think, three years of ripping the
surface off seven states."

"Well, we did drop nuclear bombs on two of their largest Canadian
cities," says the colleague in return.


While Rubin's sci-fi novel is just fiction, the story might serve to re-align
the way readers currently see geopolitics in North America, even today. More here on the Canada rules USA in 2150 nuke war thing today! in news cycles now: http://www.sdjewishworld.com/2015/08/18/heatstroke-line-imagines-war-between-u-s-canada/
Posted by DANIELBLOOM at 4:20 AM