Climate skeptic blogs own iteration of 'cli-fi' since 2009. Who knew?

Climate skeptic and humorist ''Paco'' at Pacoenterprises.blogspot.com  has been blogging his own iteration of 'cli-fi' as a term of mockery since March of 2009. Find out why in this brief item from the pen of 'cli fi' archivist Dan Bloom 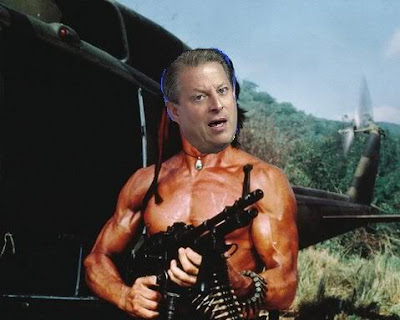 When NPR produced a short radio segment on April 20, 2013, a new buzzword was was born and some parts of the English-speaking media world took notice. Everywhere you look via Google searches, from the New York Times to the Guardian, with dispatches from Reuters and the Associated Press also chiming in, the cli-fi term that NPR reported has found a niche among headline writers and literary critics.

But the cli-fi meme didn't really begin in 2013, although that's when the mainstream media first took notice via NPR and subsequent follow-ups in the New York, the Guardian, and The Washington Post.


One must go back to March of 2009, when a part-time blogger and climate skeptic going by the pen name of Paco, first posted a scathing, sarcastic look at what he deemed as "cli-fi" -- the ''climate fiction'' as he termed it of people like Al Gore and James Hansen.

Paco (a pen name) of PacoEnterprises, who by himself coined his iteration of the 'cli-fi' term on his blog as a mocking term to describe the books and essays and documentaries of climate activists such as Al Gore and James Hansen, does not hate climate activists or scientists who say they believe in global warming. He just finds them good and ripe fodder for satire and sarcasm. To each his own.

Just as sci-fi is a term that Paco understands to mean "science fiction'' movies and novels about space travel and gigantic squids wrestling on the Moon, he has turned his coinage of cli-fi into a mocking term to tear into the science-based work of Gore and Hansen and mock their work as mere fiction about climate, since as Paco maintains, global warming is a hoax and pure hogwash.

So from March of 2009 to sometime in 2011, for three years, Paco blogged about cli-fi as a mocking term, even posting a photoshopped photo of Al Gore and calling him ''Cli-Fi Man.''

SEE LINK BELOW:
http://pacoenterprises.blogspot.tw/2012/01/cli-fi-man.html
Paco created such phrases as "The Church of Cli-fi" and "Cli-Fi Thuggery." And each time he posted a blog about these terms, his fellow skeptics posted comments applauding the way he was mocking climate activists like Gore and Hansen.

Paco's blog fell silent on the key word of ''cli-fi'' after his last post in 2011 2012 and he has not posted anything new about cli-fi term since then.

But if you follow his blog in the coming weeks and months, especially as the Paris COP21 climate talks are set to begin in late November, I am sure Paco will do some more "cli-fi" posts soon.

In fact, in a recent email to me, after I spent a few years trying to find and contact him, he sent me a very nice "nice to meet you" letter and he noted that will very likely be posting more about his version of "cli-fi" soon. Stay tuned. And we are friends now, he and I, across the Great Divide!
---------
Dan Bloom blogs about cli-fi at The Cli=Fi Report (cli-fi.net).
Posted by DANIELBLOOM at 11:37 PM