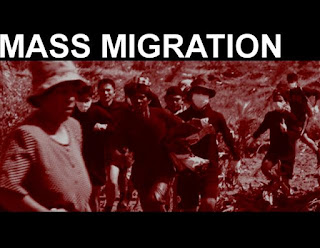 by staff writer with agencies


For Britain's John Lanchester, a novelist with a top track record, writing a new novel set for publication in March was not a piece of cake nor a joyride.

As you read the aptly-titled "The Wall, turning the pages one by one, it will be hard to imagine a more vivid expression of this decade’s darkening mood and 2019 in particular. We are treading on thin ice, and strange things are in the air. It's part sci-fi and part cli-fi.

The novel, even before it's publication in March, has already caught media attention on both sides of the Atlantic, among both British and American literary critics and book reviewers. Once the general public has a chance to dig in and read the book, more reviews will start appearing on Goodreads and Amazon, and not just in the pages of The New York Times or The Guardian.

While the novel tells a tale of a survivalist sea story, it's a bleak book that at the same time features Lanchester's singular voice, well recognizable from his work as a veteran journalist.

Example: "When bullets come close, the noise they make as they go past changes from a zing to a crack," a character in the book says, sounding very like his author.

Is the book a climate dystopia? It's a political dystopia as well, and not everyone is going to warm up to the subject matter or the way Lanchester tells the story. But for those readers looking for a dose of reality in the middle of 2019, Age of Trump and Age of Brexit, this book is sure to hit the bestseller lists.

Some critics in London are already calling it the book of the year.

Andrew Billen in the Times put it this way: "'The Wall' is a cracking adventure and an astute political fable. Every secondary school library in the country needs to order a copy," while another reviewer called it a "resonant addition to the growing body of Brexit literature."

But not everyone is on board with Lanchester's vision. Critic Jake Kerridge saus he feels the novel's ''topicality'' plays against it.

"Until we reach the time when Lanchester can say 'I told you so' or 'whoops, I was wrong', we can only partially judge this novel's worth," Kerridge opines.

Set in a near future, the book is narrated by a young man named Kavanaugh and begins just as he is starting a two-year stretch patrolling ''the Wall,'' a 6,000-mile structure which "protects" the UK against ''Others.'' Will Kavanaugh survive his stint and get off the Wall and never have to go back?

You'll find out when you read this page-turner of a thriller.

According to some observers, dystopian fiction can be seen is a form of journalism. George Orwell’s 1948 sci-fi novel ''1984'' is not so much a great work of imagination as a logical extrapolation of what would happen if the follies he reported on in 1948  went unchecked.

Pundits in 2019 are already calling John Lanchester the Orwell of our day, Britain's most brilliant journalist-novelist, one who shows ''a rare gift for reconstructing the chains of cause and effect behind the often inexplicable events in the headlines, and a Chestertonian ability to turn received wisdom.''

Migrant crises, global warming and a great border wall: Lanchester's novel captures the anxious world of today. But at the same time, his fictional world is ''intelligently conceived and dourly impressive."

''The Wall'' will stick in your mind, if you dare to read it. Welcome to high-end literature in the year of our Lord 2019.
Posted by DANIELBLOOM at 11:11 PM